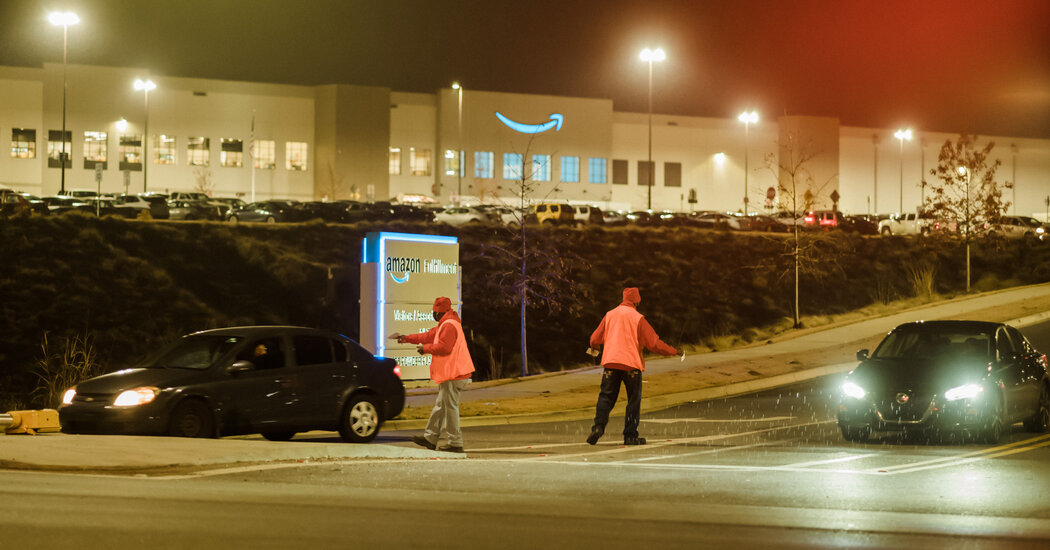 The largest, most viable effort to unionize Amazon in many years began last summer not in a union stronghold like New York or Michigan, but at a Fairfield Inn outside Birmingham, in the right-to-work state of Alabama.

It was late in the summer and a group of employees from a nearby Amazon warehouse contacted an organizer in the Retail, Wholesale and Department Store Union. They were fed up, they said, with the way the online retailer tracked their productivity, and wanted to discuss unionizing.

As the workers arrived at the hotel, union officials watched the parking lot to make sure they had not been followed.

Since that clandestine meeting, the unionizing campaign at Amazon’s fulfillment center in Bessemer, Ala., has moved faster and further than just about anyone has expected. By late December, more than 2,000 workers signed cards indicating they wanted an election, the union said. The National Labor Relations Board then determined there was “sufficient” interest in a union election among the warehouse’s roughly 5,800 workers, which is a significant bar to hit with the government agency that oversees the voting process. About a week ago, the board announced that voting by mail would start next month and continue through the end of March.

Just getting to an election is an achievement for unions, which have failed for years to break into Amazon. But persuading the workers to actually vote for a union is a bigger challenge. The company has begun to counter organizing efforts by arguing that a union would saddle workers with dues without any guarantee of higher wages or better benefits.

This will be the first union election involving the company in the United States since a small group of technical workers at a warehouse in Delaware voted against forming a union in 2014.

Much has changed since that vote seven years ago, allowing organized labor to make inroads with Amazon employees in a place like Alabama. Most of that change had come in the past year during the pandemic, as workers from meatpacking plants to grocery stores have spoken out, often through their unions, about the lack of protective gear or inadequate pay.

The retail union has pointed to its success representing workers during the pandemic as a selling point in Bessemer.

“The pandemic changed the way many people feel about their employers,” said Stuart Appelbaum, the retail union’s president. “Many workers see the benefit of having a collective voice.”

Union organizers are also building their campaign around the themes of the Black Lives Matter movement. Many of the employees at the Amazon warehouse are Black, a fact that the retail union has used to focus on issues of racial equality and empowerment. And leading the organizing effort are about two dozen unionized workers from nearby warehouses and poultry plants, most of whom are also Black.

Since Oct. 20, the poultry workers have been standing outside the Amazon gates every day starting at 4:30 a.m., urging workers stopped at a traffic light to join a union.

“I am telling them they are part of a movement that is worldwide,” said Michael Foster, a Black organizer in Bessemer, who works in a poultry plant. “I want them to know that we are important and we do matter.”

Unions have been forming in other unlikely places this year. This month, more than 400 engineers and other workers at Google formed a union, a rare move in the mostly anti-union tech industry. The Google union is meant primarily to bolster employee activism, while the union being proposed at Amazon in Bessemer would eventually be able to negotiate a contract and would seek to influence wages and working conditions.

Amazon, which has embarked on a hiring spree during the pandemic, now has more than 1.2 million employees globally, up more than 50 percent from a year earlier. But the company has also begun to face pressure from its corporate employees, over climate change and other issues, and from many warehouse workers around the country who have felt emboldened to speak up. The attention is likely to only increase with Amazon on pace to surpass Walmart as the country’s largest private employer in a few years.

Success at the Bessemer warehouse, which opened in March, could inspire workers in the booming e-commerce industry more broadly, said Nelson Lichtenstein, a labor historian at the University of California, Santa Barbara. “If you can do it in Alabama, we can do it here in Southern California for sure,” he said. “It would have a huge ripple effect.”

In a statement, Heather Knox, an Amazon spokeswoman, said the company did not believe that the union “represents the majority of our employees’ views.” She added, “Our employees choose to work at Amazon because we offer some of the best jobs available everywhere we hire, and we encourage anyone to compare our total compensation package, health benefits and workplace environment to any other company with similar jobs.”

The company created a website that suggests that the union’s dues — which could total about $9.25 a week for a full-time employee — would leave workers with less money to pay for school supplies.

“Why not save the money and get the books, gifts and things you want?” the website says.

An early version of the website included photos of happy-looking young workers, including the image of a Black man leaping in the air that appeared to be from a free stock photo website. On the site the man and a woman are pictured in an image labeled “excited african-american couple jumping, having fun.”

Asked about the site, Amazon called it “educational” and said it “helps employees understand the facts of joining a union.” (As of last Tuesday evening, the company had removed the stock photos including that of the leaping man.)

Race has often been at the heart of unionizing campaigns in the South. A century ago, multiracial steel and coal miners unions around Birmingham were a “cockpit of labor militancy,” Mr. Lichtenstein said.

In the 1960s, unions — including the Retail, Wholesale and Department Store Union — gave Black workers a venue to assert their civil rights and gain more equality in the workplace.

Organizing was dangerous work. A Black organizer with the retail union in Alabama named Henry Jenkins recalled being shot at and receiving death threats at his home. At one point, a bomb was found in his car outside a church in Selma. Mr. Jenkins died in 2011 after an illness.

The retail union has been influential in the Northeast, where it represents workers at Macy’s and Bloomingdale’s. But its strength has also grown in the South, particularly in poultry, an industry with traditionally dangerous jobs and a work force with many Black employees.

This spring, the union was active in publicizing deadly virus outbreaks in poultry plants. The union’s Mid-South Council president, Randy Hadley, called out the industry for “egregious inaction” in providing basic protections for workers.

Buoyed by its rising profile during the pandemic, the union trained a group of workers to start organizing additional poultry facilities across the South. When the Amazon workers reached out, the union, which had failed to gain traction at an Amazon warehouse in Staten Island two years earlier, decided to redirect the poultry workers to the Bessemer warehouse. In contrast to past campaigns, the union decided it would keep mostly quiet during the Alabama organizing drive.

“Some people do not expect us to succeed,” said Josh Brewer, who is leading the organizing effort. “I believe we can do it.”

On the evening of Oct. 20, two dozen poultry and warehouse workers showed up outside the Amazon gates.

Mona Darby, who has spent the past 33 years processing chickens, immediately started approaching the Amazon workers in their cars as they headed home. Ms. Darby grew up in Alabama, one of 18 children. She started working as a housekeeper for local doctors and lawyers when she was 15. But she wanted more stable work, health care and retirement benefits, so she got a job in a chicken plant.

Today, the starting wages in Alabama’s unionized poultry plants are about the same as those at Amazon. (The average hourly wage at the Bessemer warehouse is $15.30.) But Ms. Darby said the union provided her with protections and job security that other jobs lacked.

On that first evening at the Bessemer warehouse, Ms. Darby said, a white man approached her and said that Amazon didn’t want a union and that he didn’t want her “Black ass on our property.”

“You are going to see my Black ass out here all day, every day,” Ms. Darby said she had responded.

Ms. Darby said she had seen the man remove his name badge before he walked up to her. She told a police officer present what the man had said, but the officer didn’t take notes.

The Bessemer police said they had no record of the incident. Amazon declined to comment.

On Dec. 18, lawyers for Amazon and the union gathered on Zoom to discuss how many workers would be part of the potential union.

The hearing dragged on for days, as Amazon’s lawyer asked questions in minute detail about the warehouse, until the federal hearing officer eventually cut the testimony short.

One issue Amazon has insisted on is that the election be held in person at the warehouse. The company even offered to rent out hotel rooms for the federal election monitors to help them isolate from contracting the virus in an area with an infection rate of 17 percent. The National Labor Relations Board ruled against in-person voting on Jan. 15, stating that a company paying for hotel rooms for government employees was not a good idea. On Friday, Amazon asked for a stay of the mail-in election, arguing that infection rates were declining and insisting that voting should take place at the warehouse.

Until all the votes are cast, Mr. Foster and the other poultry and warehouse workers are planning to stay outside the Amazon gates. He said some of the Amazon workers were fearful of being seen talking to the organizers at the stoplight.

On a few occasions, Mr. Foster has said a prayer with workers before the light changes to green.

“We want to show them we are not leaving them until this is done,” he said.