Amazon Workers Near Vote on Joining Union at Alabama Warehouse 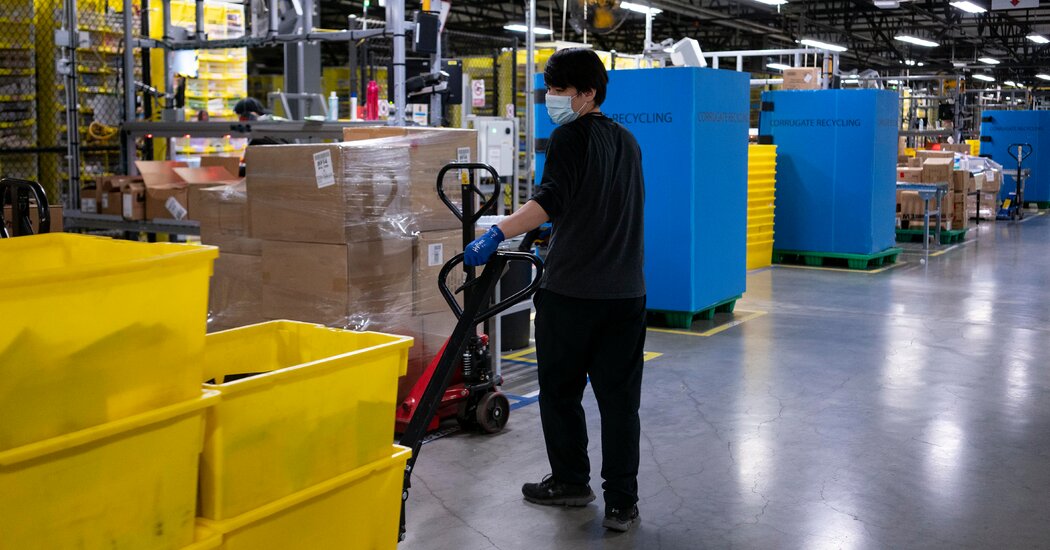 Thousands of workers at an Amazon warehouse near Birmingham, Ala., moved closer this week to holding a vote on whether to form a union, a milestone at the nation’s fastest growing large employer and a coup for organized labor, which has tried for years to make inroads at the e-commerce giant.

After three days of hearings before the National Labor Relations Board, which concluded on Tuesday, Amazon and the union agreed on one of the most crucial details of an election: which types of workers in the facility would be allowed to vote.

The agreement between Amazon and the Retail, Wholesale and Department Store Union sets the stage for one of the few times that the company’s workers have had an opportunity to vote on whether to unionize.

The vote at the fulfillment center in Bessemer, Ala., about 14 miles from Birmingham, could cover roughly 5,800 workers, including full-time and seasonal employees.

Amazon and the union still need to agree whether the voting will take place by mail or in person. The election is expected to be held early next year, though the N.LR.B. still needs to set a date.

The previous union election at Amazon involved a few dozen technical workers at a warehouse in Delaware in 2014. They decided not to unionize.

Amazon is undertaking a historic hiring spree during the pandemic, adding 1,400 employees a day and putting the company on a pace to become the nation’s largest private employer in a few years.

“We don’t believe this group represents the majority of our employees’ views,” an Amazon spokeswoman, Heather Knox, said in a statement about the union. “Our employees choose to work at Amazon because we offer some of the best jobs available everywhere we hire, and we encourage anyone to compare our overall pay, benefits and workplace environment to any other company with similar jobs.”

The Retail, Wholesale and Department Store Union represents workers at brick-and-mortar retailers like Macy’s flagship store in Herald Square, H&M and Zara. The union’s ranks also include a diverse mix of workers at places like the General Mills factory that makes cereal in Iowa and poultry plants across the South.

The union was involved in opposing Amazon’s proposal to build a second headquarters in New York, around the same time it was trying to organize workers at the company’s large warehouse on Staten Island. But that 2018 effort never progressed to a formal union election.

The pandemic rekindled attention in Amazon’s labor force, part of a broader focus on the safety, pay and sacrifices of essential workers in grocery stores and e-commerce centers who helped keep goods flowing to homebound consumers during this year’s shutdowns.

Amazon also faces increasing scrutiny, both on Capitol Hill and by state officials, about its growing might in the retail industry and its role as a large employer.

Amazon has trumpeted its investments in safety, including providing its workers with free Covid-19 testing in labs it set up and operates. It also points to its starting wage of $15 an hour and health care benefits. Labor advocates and some elected officials have still raised concerns about the rates of injuries in warehouses, inflexible work schedules and the surveillance of workers to maximize productivity.

The company has also been accused of retaliating against workers who speak out. Last week, the N.L.R.B. said it had found merit in a worker’s claim that Amazon illegally retaliated against him for staging protests this spring outside the Staten Island warehouse to draw attention to concerns about safety during the pandemic. Amazon said the worker had been fired for “a clear violation of our standards of conduct and harassment policy.”

The Bessemer warehouse opened just as Covid-19 arrived in the United States. Amazon announced plans for it in 2018, part of an expansion into midsize metropolitan areas so the company could store more products closer to customers for quick delivery. The local economy used to depend on steel industry jobs, but those have largely disappeared, and Amazon, which pledged to hire 1,500 people, received $51 million in local and state tax incentives. Average pay at the warehouse is $15.30 an hour, Ms. Knox said.

In November, the union submitted its petition to hold the election, saying it had sufficient support among the workers it said should be part of the bargaining unit. The company asked for more time to prepare a response, citing the busy holiday shopping season.

“This is a year where more consumers than ever are shopping online and expecting prompt and accurate deliveries,” Amazon said in a filing with the N.L.R.B.

Haggling over the terms of a union election can drag on for months, but this process moved relatively quickly. The union filed a petition for the election with the N.L.R.B. about a week before Thanksgiving.

Over the course of the hearing, which began on Friday, lawyers for the union and Amazon discussed how many workers at the center should be allowed to vote. Amazon argued that temporary workers, usually hired during the holiday season, should be included, along with full-time and part-time employees performing the same tasks.

The union agreed to include the seasonal workers, even though it means expanding the pool of employees it needs to win over. But by conceding the seasonal issue, the union probably avoided days of testimony from Amazon that could have stretched well past Christmas and slowed some of the organizing momentum.

“Our interest is in making sure there is an election soon,” Richard Rouco, a lawyer for the union, said on Monday.

The other sticking point is whether the voting should occur in person or by mail. Amazon wants the election to occur in person, even though the N.L.R.B. has raised serious concerns about exposing its election monitors to the coronavirus in the Bessemer area, where there has been a high rate of virus infections.

Harry Johnson, a lawyer for Amazon, suggested that local hotel rooms and buses could be rented exclusively for the federal officials to prevent them from being exposed while they conducted the election.

Mr. Rouco retorted, “I am not going to let Amazon buy a city” to prevent workers from voting by mail.

The N.LR.B.’s regional office in Atlanta is expected to rule on the mail-voting issue early next month.