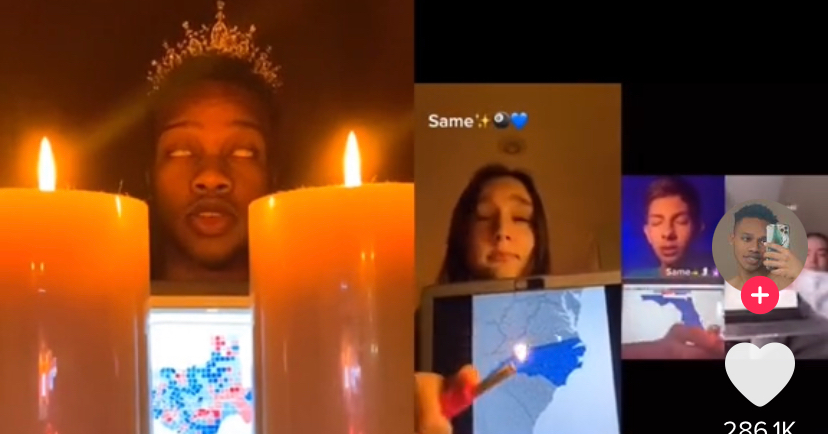 On election night, tens of millions of Americans turned to their cable networks of choice for returns and projections. Meanwhile, millions of young viewers — some first-time voters and many too young to cast ballots — turned instead to TikTok for virtual watch parties, political analysis and a bit of manifesting.

“Tonight is an extremely important night in Gen Z,” said Zane Mooneyhan, 20, who hosted a livestream as part of the Libertarian Hype House, a political collective. “For a lot of people this is the first election where we’re cognizant of the election and the impact that it has.”

Since its arrival in the United States in 2018, TikTok has become the default platform for millions of teenagers who want to educate themselves on issues, express their political ideologies and organize to take action. It has given rise to a new class of political pundits, many of whom users turned to on Tuesday to make sense of the night’s news and uncertainty.

In interviews on Tuesday, several teenagers said they preferred to see election results come in on TikTok, where they could process them collectively. “We’re all pretty anxious, we’re all pretty scared,” said Hannah Ziouani, 19, a TikToker in Colorado. “We’re looking forward to getting it over with.”

Onscreen, supporters of Joseph R. Biden Jr. expressed a mix of optimism and apprehension, while TikTokers who hoped to see President Donald Trump re-elected were largely confident, using their streams to boast about what they believed to be an inevitable victory.

Nick Lowenberg, 18, a conservative influencer, said that the pro-Trump contingent on the app has been vocal leading up to Tuesday. “I think conservatives dominate the political side of TikTok,” he said, “but I think overall, TikTok users as a whole are definitely more left-leaning.”

Shortly after midnight, Jax James, a 17-year-old TikTok star with 2.3 million followers, started a livestream titled “Scared.” On it, she held her head in her hands as she discussed the votes coming in. “Trump is probably going to win Texas,” she said as messages from her thousands of viewers flew across the screen.

Behind the scenes, political TikTokers communicated in large group chats, trading information and deciding when to make their own calls on certain states.

“I’m communicating with upwards of 70 people, all from political TikTok, about what’s going on,” said Ashleigh Hunniford, 17, a high school senior in Colorado. “I’m relying on different sources that are online. I’m constantly checking Twitter for other people’s predictions and talking to other people about what they think is going to happen in real time.”

Many were wary of jumping the gun before outcomes were fully known, and relied on the data-driven calls of traditional media. “The next few days are going to be hectic, and it is my responsibility and other big creators’ responsibility to not mislead people into believing that the election has gone one way without having states or all the votes counted,” said Harry Sisson, 18, known online as @typical_democrat. “It’s incumbent on us to be accurate. For the next few days I plan on my content being around how states are looking if they’re not called yet, and what those empty states mean.”

Aidan Kohn-Murphy, 16, a founder and lead organizer from TikTok for Biden, a group of more than 480 creators, planned an elaborate election night rollout for the account’s million followers. The account live streamed throughout the night, updating the stream’s title with news like “lead in Arizona.” When The Associated Press called a state, TikTok stars in that state would create a custom video announcing the news, which was promoted on the @TikTokForBiden handle.

That doesn’t mean creators weren’t treating Tuesday night as a big event. Mr. Mooneyhan, of the Libertarian Hype House, planned his election night stream outfit in advance. He donned a brown fur coat and gold circular glasses for the occasion. “It’s my drip outfit,” he said. “It’s what I wear when I want to be dripped out.” Many TikTokers wore campaign merch. One person showed up on stream in bunny ears, and several male influencers streamed shirtless.

“Compared to mainstream media, our livestream where we have people come in and interact is a much more fun and comfortable environment to consume election information. You feel like you’re a part of what is going on,” Mr. Mooneyhan said.

MemePAC, a youth-led, F.E.C.-registered super PAC that opposes Mr. Trump, hosted a livestream on TikTok displaying a website created by Jackie Ni, 18, a founder of the group. The site pulled data directly from The New York Times election map and used an Among Us-style animation to eject Mr. Trump from the White House for every 10,000 popular votes that Joe Biden received.

“I saw a lot of people were really stressed about the election, and I wanted to give them a way to see the results, but in a less stressful and more playful manner,” Mr. Ni said.

Ashton Ray, 17, a TikTok star with 920,000 followers, said the app has proved to be a way for people not yet of voting age to participate in the political process. “Me and a lot of my fellow creators, the majority of us are under the voting age, but we have these large platforms,” he said. “We’ve been able to reach millions of young people.”

As the night wore on, it became clear that results for some states wouldn’t be called until the next day or later in the week. Ms. Hunniford sat in her bedroom and refreshed Google’s live election results.