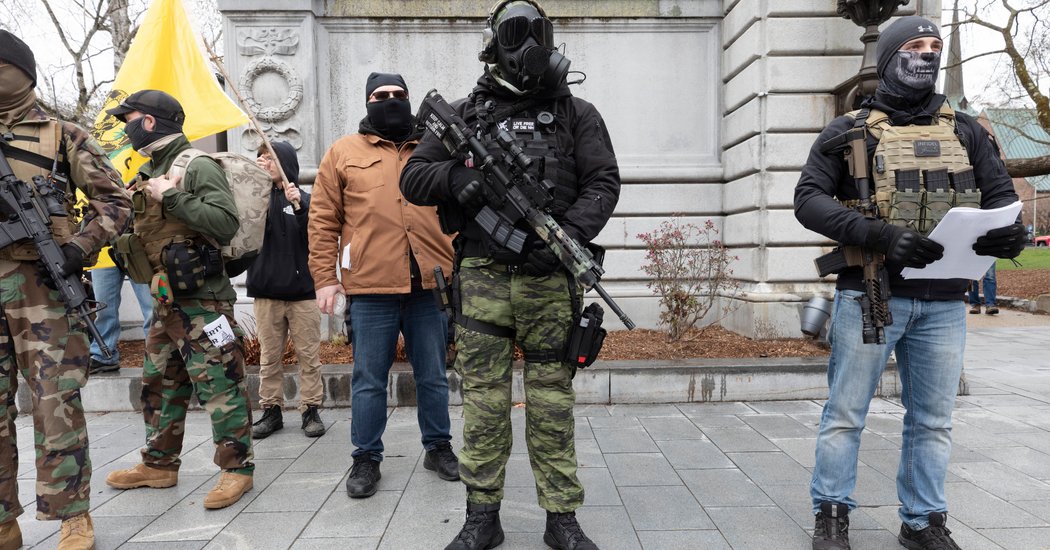 Facebook said on Tuesday that it took down a network of accounts, groups and pages connected to an antigovernment movement in the United States that encourages violence.

People and groups associated with the decentralized movement, called boogaloo, will be banned from Facebook and Instagram, which Facebook also owns, the company said. Facebook said it had removed 220 Facebook accounts, 95 Instagram accounts, 28 pages and 106 groups as a result of the decision. It is also designating boogaloo as a dangerous organization on the social network, meaning it shares the same classification as terrorist activity, organized hate and large-scale criminal organizations on Facebook.

As a result, Facebook said it would ban people and organizations linked to boogaloo, and remove content that praises, supports and represents the movement.

The boogaloo network promoted “violence against civilians, law enforcement, and government officials and institutions,” the company wrote in a blog post. “Members of this network seek to recruit others within the broader boogaloo movement, sharing the same content online and adopting the same offline appearance as others in the movement to do so.”

The decision is the latest in a flurry of recent moves by tech companies to tighten the speech allowed on their popular services and more aggressively police extreme movements. The issue has become more pronounced in recent weeks after the death of George Floyd, a Black man in Minneapolis who was killed in police custody last month. The killing set off major protests across the country demanding changes to police departments and the treatment of Black people more broadly.

On Monday, Reddit said it was banning roughly 2,000 communities from across the political spectrum that attacked people or regularly engaged in hate speech, including “r/The_Donald,” a community devoted to President Trump. YouTube said it barred six channels for violating its policies, including those of two prominent white supremacists, David Duke and Richard Spencer.

Facebook’s changes have so far largely focused on the boogaloo movement and white supremacy hate groups. In May, Facebook said it updated its policies to ban the use of “boogaloo” and related terms when used in posts that contain depictions of armed violence. The company said it had identified and removed over 800 posts tied to boogaloo over the past two months because they defied its Violence and Incitement policy, and that it did not recommend pages and groups referencing the movement to others on the social network. This month, the company said that it had removed two networks of accounts connected to white supremacy groups that encouraged real-world violence.

Followers of the boogaloo movement seek to exploit public unrest to incite a race war that will bring about a new government. Its adherents are usually staunch defenders of the Second Amendment, and some use Nazi iconography and its extremist symbols, according to organizations that track hate groups.

“Boogaloo” is a pop culture reference derived from a 1984 movie called “Breakin’ 2: Electric Boogaloo” that became a cult classic. Online, it has been connected to what some consider sarcastic and humorous memes, as well as with occasional physical violence and militaristic shows of force.

In June, the Federal Bureau of Investigation arrested three men in Nevada who called themselves members of the boogaloo movement, accusing them of trying to incite violence at an anti-police protest in Las Vegas. In May, police officers in Denver seized three assault rifles, magazines, several bulletproof vests and other military equipment from the car trunk of a self-identified boogaloo follower who was headed to a Black Lives Matter protest — and had previously live-streamed his support for armed confrontations with the police.

In addition to the boogaloo network, Facebook said it would also remove 400 public and private groups and more than a hundred pages that also violate its Dangerous Individuals and Organizations policy. Alex Stamos, director of the Stanford Internet Observatory and the former chief security officer at Facebook, said the company’s dangerous organizations policy came out of the fight to kick the terrorist group ISIS off social media.

Facebook said it would continue to identify and remove attempts by members of the boogaloo movement to return to the social network.

“The Dangerous Individuals policy at Facebook mirrors the language of law enforcement, and meets a high threshold of online harms that lead to direct action in the real world,” Mr. Brookie said. “Limiting the online conversation that leads to that action is a good thing and a public safety issue.”

Emerson Brooking, a resident fellow at the Atlantic Council’s Digital Forensic Research Lab, said that deciding which posts linked to the boogaloo movement could stay up and what should be taken down had always been “a content moderation nightmare” for social networks.

“Many adherents can claim, truthfully, that they do not engage in violence or advocate for white nationalism,” he said. “As a result, it has evaded content moderation policies for several months.” With its announcement, he said, Facebook demonstrated an understanding of how harmful the boogaloo movement was.

But Mr. Stamos said the decentralized nature of the movement and its tendency to use irony and euphemism in posts could make continued enforcement difficult.

“Deciding who is actually a boogaloo member now that they are motivated to obfuscate their allegiances will be a huge, ongoing challenge,” Mr. Stamos said.