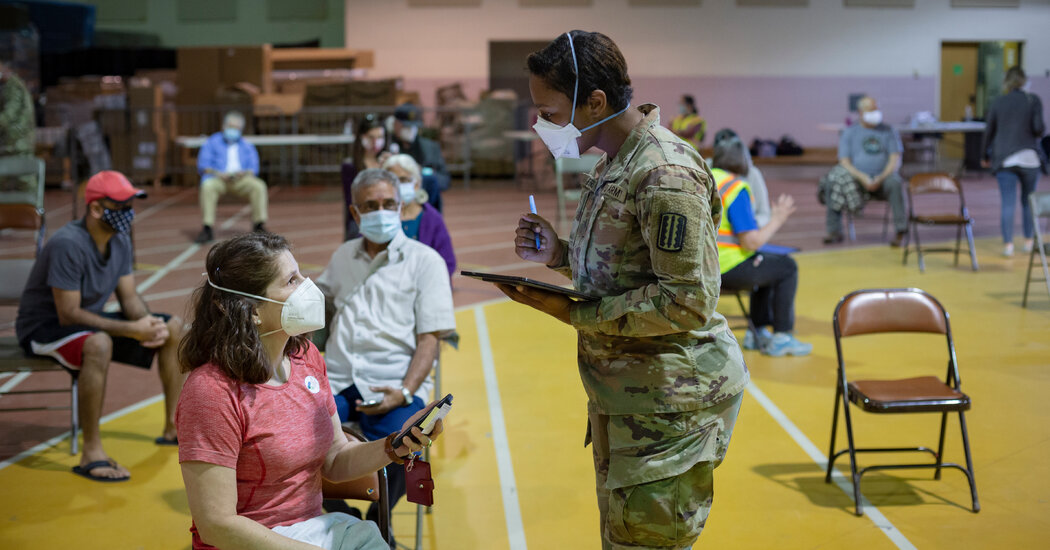 When coronavirus vaccines first became available, state health officials in Virginia turned to software recommended by the Centers for Disease Control and Prevention to schedule appointments. But people complained that the software, called VAMS, was too confusing for older adults to use.

So the state switched to another system, PrepMod — but that had problems, too. Links sent to seniors for their appointments were reusable and found their way to Facebook, leading to one vaccination event in Richmond with dozens of overbookings. Some of those people threatened health care workers when they were turned away.

“It was a nightmare scenario,” said Ruth Morrison, the policy director for the Richmond and Henrico County health district. “People showing up confused, irate, thinking they had an appointment.”

State and local health departments around the country continue to face delays dispensing shots, in part because flaws remain in the appointment software tools like those used in Richmond. The problems threaten to slow the vaccine rollout even as supplies and distribution are picking up quickly across the country.

Large software systems have often been problematic for companies and governments. HealthCare.gov, a site released after the Affordable Care Act, crashed early on. But the issues with the vaccine sites have an added sense of urgency because health officials are trying to vaccinate as many people as possible, as fast as possible.

On Thursday, President Biden said that his administration would send out technical teams to help states improve their websites. He also said the federal government would open a website by May 1 that would allow Americans to find out where the vaccine is available.

Many state officials have switched software providers, only to see little or no improvement. In California, tech mishaps have allowed ineligible people to snatch up appointments. Massachusetts residents have been stymied by crashing websites. Some North Carolina residents are eschewing online sign-ups entirely, instead engaging in a vaccine free-for-all.

PrepMod is being used by 28 states and localities, after many states shunned the $44 million VAMS tool built by Deloitte. Salesforce and Microsoft have developed vaccine software, too, with their customers being similarly frustrated. Smaller tech companies have pitched their own scheduling tools as well.

“It’s like a patchwork quilt,” said Ms. Morrison, who decided after the failed PrepMod trial that her county would try something else. “Some of these systems have strengths, but they all have weaknesses, too.”

Other health officials have defended the appointment systems, and the developers behind the software said the complaints about their products were overblown.

Tiffany Tate, PrepMod’s creator and the executive director of the Maryland Partnership for Prevention, said criticisms of her system largely stemmed from health providers’ lack of knowledge about how to use it, or from the constantly shifting needs of states.

“The pandemic’s evolving, and we’ve got to be able to keep up with it,” she said. “We just have to be a very flexible platform.”

Deloitte, whose software is used by nine states, said VAMS was originally intended for smaller groups at early stages of states’ vaccine rollouts, so the company was “responding quickly to meet their changing needs” and was updating the system to handle a greater load.

Health experts say multiple factors complicated the software rollout. In some cases, developers condensed work that would normally take years into weeks, leading to glitches. In addition, the varied approaches to determining eligibility in the dozens of localities using the software have made it difficult to develop a one-size-fits-all approach.

Some states use more than half a dozen appointment scheduling systems, from tools used by federal, state and local agencies to the software employed by private hospitals and pharmacies to rudimentary solutions like SignUpGenius. Some sites do not support appointment scheduling at all, but allow people to browse databases to find available vaccines or get on wait lists. Often, the systems cannot communicate with one another.

“You’re basically building and testing data systems on the fly as millions of people are trying to find vaccines,” said Claire Hannan, the executive director of the Association of Immunization Managers, which advocates for state health departments.

Microsoft, which has sold vaccine software to several states and Washington, D.C., has frustrated New Jersey with its system, and in late February, after days of website crashes in the nation’s capital, the company admitted it had “fallen short.”

Microsoft said in a statement that it was “focused on helping governments manage their Covid-19 vaccination programs as quickly, safely and efficiently as possible.”

PrepMod’s woes have led to delays in vaccine rollouts in places like Washington State and Pennsylvania. When the vaccine appointment website in Massachusetts went down for several hours after a surge in demand, PrepMod took responsibility and apologized.

Andrew Therriault, a Boston data scientist, said he was “astounded” by the extent of PrepMod’s shortcomings. One problem he found was that the system did not reserve an appointment slot as people filled out their information, so they could be booted out at any time if someone else beat them to that particular slot.

“I try to imagine somebody doing this who’s not so tech savvy — that basically means they have no opportunity to compete,” Mr. Therriault said.

Some of the sign-up software has also caused major headaches by not allowing for unique registration links that expire after a single use.

The reusable links have stymied vaccination efforts in places like California, where health departments are using both PrepMod and a Salesforce-powered system, MyTurn.

In some cases, health officials aiming to reach Black and Latino communities that had low vaccination rates issued MyTurn appointment codes to those groups that ended up being shared widely, including among more affluent, white communities. Because the codes did not expire after a single use, those people were able to use them to get vaccinated before it was their turn.

Ms. Tate of PrepMod said health care workers and others who were improperly sharing the links were at fault.

“That’s not a problem with our system. That’s a problem with people who should be responsible,” she said. The company, she said, has added an option for unique links.

UC San Diego Health, which is operating a drive-through mass vaccination site, is using its existing software rather than MyTurn because the two systems are incompatible, said Dr. Christopher Longhurst, UC San Diego Health’s chief information officer. Otherwise, those arriving for a second dose scheduled in the hospital system would have to be separated from people scheduled in MyTurn, he said.

“We would have to run out all of our second doses in some lanes while using new software in other lanes,” he said. It “would be incredibly inefficient.”

This week, the MyTurn system offered more appointments than it was supposed to at a vaccination site in San Diego run by Scripps Health, forcing the site to close for several days because it ran out of doses.

“The MyTurn system is fraught with issues,” Dr. Ghazala Sharieff, Scripps’s chief medical officer, said. “These challenges are adding another layer of unnecessary stress to our team.”

Health officials said the reliance on outside companies’ imperfect tools underscored the need to invest in technology for public health departments, many of which still use paper and fax machines to keep records.

State registries that keep track of residents’ vaccination histories — known as immunization information systems — could have been adapted to schedule appointments, said Mary Beth Kurilo, a senior director at the American Immunization Registry Association. But the federal government never asked them to, she said, and they would have needed more money and time to prepare.

Some regions have elected to avoid technology entirely.

In Johnston County, N.C., southeast of Raleigh, the Health Department decided it would have been too much of a strain on the staff to manage appointments online, so shots are first come first served.

The policy has been efficient, said Lu Hickey, the Health Department’s spokeswoman, but it means the county — which also does not require in-person identification — does not know whether people are being vaccinated in the proper order and has to rely on the honor system.

In Richmond, Ms. Morrison said officials were searching for solutions and even thinking about trying VAMS again.

“We’re cobbling it together at the local level through a lot of manual effort and workarounds we’ve put in place to put Band-Aids on,” she said.