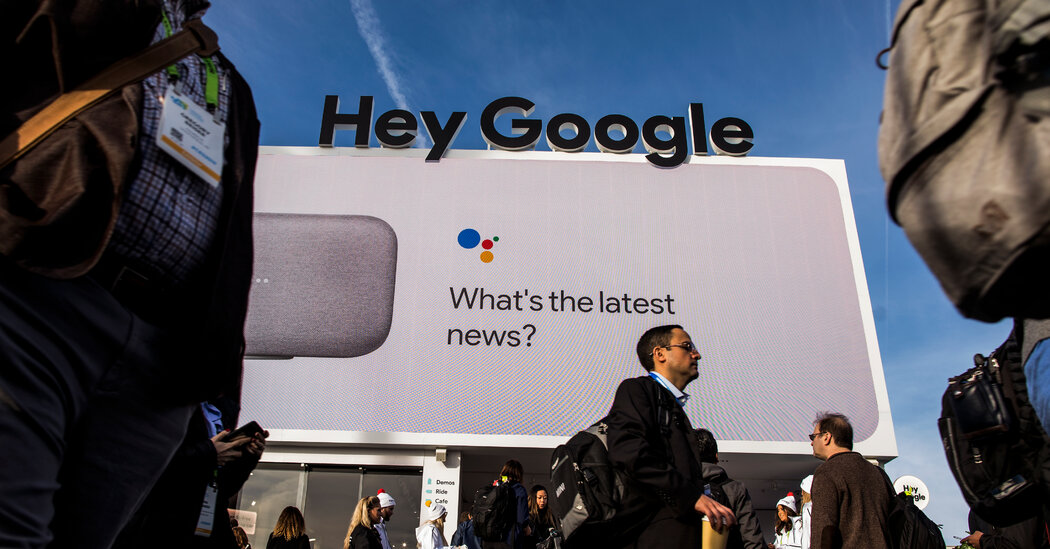 One day after 10 other states accused Google of abusing its dominance in advertising and overcharging publishers, and two months after the Justice Department said the company’s deals with other tech giants throttled competition, the bipartisan group of state prosecutors said in a lawsuit on Thursday that Google downplayed websites that let users search for information in specialized areas like home repair services and travel reviews. The prosecutors also accused the company of using exclusive deals with phone makers like Apple to prioritize Google’s search service over rivals like Bing and DuckDuckGo.

That suppression, the states said in their lawsuit, has locked in Google’s nearly 90 percent market dominance in search and has made it impossible for the smaller companies to grow into formidable competitors. Google has sought to extend that dominance to new venues like home voice assistants, said the prosecutors, from states including Colorado, Nebraska, New York and Utah.

The cascade of lawsuits against Google, which the company says it will fight in court, are indicative of the growing backlash against the largest tech companies, a movement that increasingly looks like it will usher in major changes for some of the world’s most popular digital services.

Critics have argued for years that Google, Apple, Facebook and Amazon built sprawling empires over commerce, communications and culture, and then abused their growing power. But only recently have federal or state regulators brought major cases against them.

The Federal Trade Commission and 40 state attorneys general last week accused Facebook of buying smaller rivals like Instagram and WhatsApp to maintain its dominance, in a case that threatens to break the company apart. Regulators in Washington and around the country are also investigating Amazon and Apple.

In addition, Democratic and Republican political leaders have assumed a far more aggressive stance against the industry, including pushing changes to a once-sacrosanct law that protects sites from liability for the content posted by their users.

“Our economy is more concentrated than ever, and consumers are squeezed when they are deprived of choices in valued products and services,” said Phil Weiser, Colorado’s attorney general. “Google’s anticompetitive actions have protected its general search monopolies and excluded rivals, depriving consumers of the benefits of competitive choices, forestalling innovation and undermining new entry or expansion.”

The prosecutors filed the lawsuit in the U.S. District Court of the District of Columbia and asked the court to combine it with one filed by the Justice Department in October, which includes similar accusations. If the court combines the suits, it will expand the scope of the federal case to include a much wider array of accusations about Google’s search business. The multiple cases could take years to resolve.

Adam Cohen, a director of economic policy at Google, said in a blog post that the lawsuit “seeks to redesign search in ways that would deprive Americans of helpful information and hurt businesses’ ability to connect directly with customers.”

“We look forward to making that case in court, while remaining focused on delivering a high-quality search experience for our users,” he said.

The company has long denied accusations of antitrust violations, and is expected to use its global network of lawyers, economists and lobbyists to fight the multiple accusations against it. The company has a market value of $1.18 trillion and cash reserves of over $120 billion.

Taken together, the three lawsuits paint Google as a ruthless corporate behemoth choking off the competition in a wide range of businesses. It is a far cry from how Google has portrayed itself in the past (famously in a company-sanctioned movie, “The Internship”): a good-natured and conscientious organization full of playful nerds.

Google has grown from a start-up in a garage to tech conglomerate with 130,000 employees. The company, which once declared that “don’t be evil” was its corporate motto and was seen as the counterweight to Microsoft and other industry bullies of the past, is now viewed as the domineering force of Silicon Valley and one of the companies carving up the tech landscape.

“Collectively, this will be a comprehensive examination of Google’s ascent to power over the last 25 years,” said William Kovacic, a former chairman of the Federal Trade Commission. “These are formidable threats to the company.”

The Justice Department and state attorneys general have looked askance at how Google has preserved its dominance in search and advertising technology by striking deals with other tech heavyweights such as Apple and Facebook to close off markets to competition.

The lawsuit filed Thursday focuses on how Google maintained its hold on online search. While Google’s ambition has long been to create a directory for the entire web, over the years, other companies have developed search engines that specialize in a specific area. Yelp provides reviews for local businesses. Tripadvisor offers hotel reviews. Angie’s List points users to reliable home repair services.

Prosecutors said that Google had methodically downplayed these sites in its own search results while often prominently displaying its own competing reviews or services. That prevented any company from creating a broader grouping of specialized services that could have challenged Google’s search engine.

More recently, the company has used illegal tactics to extend its dominance to new vehicles for online search, including connected cars and home voice assistants, the prosecutors said.

Mr. Weiser said in an interview that they aren’t intimidated by Google’s expected army of litigators and lobbying around its defense.

“We have done a thorough investigation and we feel confident about our case,” he said. At a news conference earlier in the day, he said that it was “premature” to discuss specific outcomes for the case, such as ways in which the company could be broken up.

The states began their search investigation in late summer 2019, part of a tidal wave of new scrutiny over the power of big tech unseen since the antitrust case against Microsoft two decades ago.

The Google investigations moved faster than the other inquiries into Amazon and Apple because of yearslong accusations of Google’s anticompetitive practices by rivals like Microsoft and Yelp, and publishers like News Corp. European cases against Google and an investigation by the F.T.C. into Google’s search practices that ended in 2013 have created volumes of records and theories of harms. The agency’s inquiry closed without action.

The states said they worked closely with the Justice Department in their investigation. They interviewed hundreds of witnesses from Google and rival companies and collected more than 45,000 private documents as evidence.

Thursday’s announcement reflects the deep interest among regulators around the world in Google’s signature search product.

In Europe, regulators fined Google roughly $2.7 billion for privileging its own comparison shopping tool over those produced by independent websites. European Union authorities also fined Google for bundling its services with its Android mobile operating system, and Google agreed to let rival search engines bid for the default spot on some devices.

Gene Munster, a longtime technology analyst and a managing partner at Loup Ventures, a venture capital firm in Minneapolis, said he doesn’t expect consumers to abandon Google products, but that the brand of Google as a company has taken a hit.

“For the public perception of Google, it’s a black eye. They’re no longer able to portray themselves as the ‘don’t be evil’ company,” said Mr. Munster. “I think they are squarely in the camp of a tech company that consumers are more suspicious about today than they were five years ago.”

Tom Miller, the Democratic attorney general of Iowa, who signed unto Thursday’s suit, reflected on the case’s similarities with the federal and state lawsuits against Microsoft. Mr. Miller was a state attorney leading the states’ charge against Microsoft.

He said that although Microsoft settled charges, years of litigation from the late 1980s to the early 1990s clearly forced the company to correct its anticompetitive business practices. He said antitrust action, which could stretch on for years in courts, can help encourage more competition no matter the results of litigation.

“Some people argue that if we had not brought the case” against Microsoft, Mr. Miller said, “there would not have been a Google.”