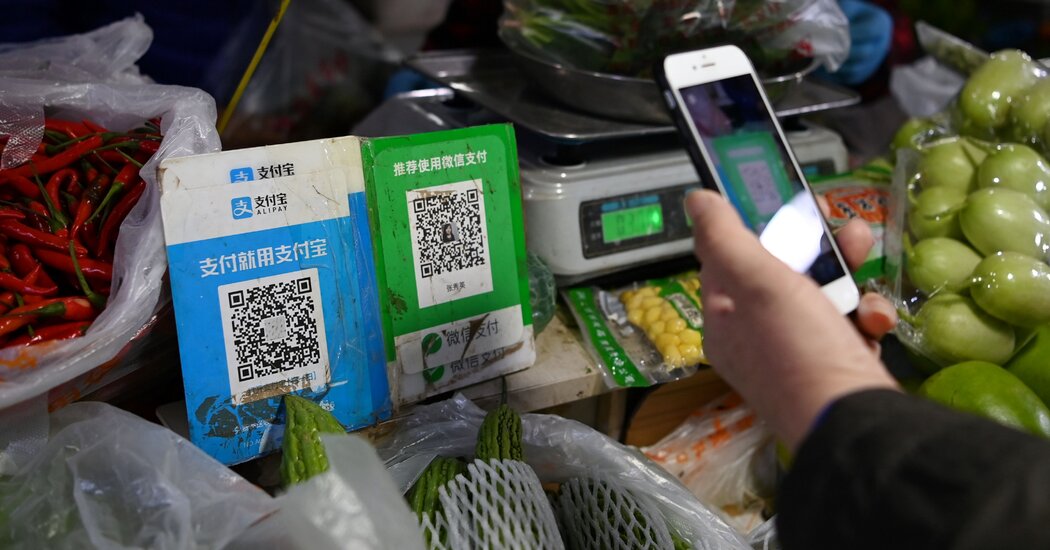 WASHINGTON — President Trump on Tuesday signed an executive order prohibiting transactions with eight Chinese software applications, including Alipay, the payment platform owned by Ant Group, and WeChat Pay, which is owned by Tencent.

The move, two weeks before the end of Mr. Trump’s term, could help lock in his administration’s harsher stance toward China and is likely to further rankle Beijing. But defining the scope of the order and enforcing it would presumably fall to the incoming Biden administration, which has not clarified whether it will try to enact Mr. Trump’s bans, creating uncertainty about the efficacy of the move.

The executive order, issued late Tuesday, will bar any transactions with “persons that develop or control” the apps of Alipay, CamScanner, QQ Wallet, SHAREit, Tencent QQ, VMate, WeChat Pay, WPS Office and their subsidiaries after a period of 45 days.

In the order, the president said that China had been using “bulk data collection” to advance its economic and national security agenda, and that the targeted apps put Americans at risk.

“The United States has assessed that a number of Chinese connected software applications automatically capture vast swaths of information from millions of users in the United States, including sensitive personally identifiable information and private information,” the order said. “At this time, action must be taken to address the threat posed by these Chinese connected software applications,” he wrote.

The executive order is the latest escalation by the Trump administration against China. Under Mr. Trump, the White House has ramped up tariffs and waged a trade war. It has also targeted Chinese-owned social media services, saying they provide a conduit for Chinese espionage and pose a national security risk to the American public. Last fall, the Trump administration issued executive orders banning two other popular Chinese-owned social media services, TikTok and WeChat.

But both of those bans have become entangled in litigation, and the services continue to operate in the United States. That raises the question of whether American courts will issue an injunction to stop Mr. Trump’s latest bans on Chinese services as well.

In a briefing Tuesday evening, a senior official with the Trump administration said that it still expected to prevail in those court cases, and that legal challenges to the TikTok and WeChat orders had centered on First Amendment rights, which would most likely not be a significant concern with the payment platforms and other apps affected by the latest order.

Tencent declined to comment. The other Chinese tech companies affected by the order did not immediately have a comment.

The order’s reach may be limited, given that the vast majority of users of the affected apps reside in China. Users of Alipay, for example, are generally required to possess a bank account in China and a Chinese cellphone number. Samm Sacks, a cybersecurity policy and China digital economy fellow at the New America think tank, said it was unlikely that many of the apps included in the executive order handled much data belonging to American citizens.

Still, the restrictions could fall heavily on Chinese-Americans who travel between the countries or use the services to stay in touch or carry out business with contacts in China.

The measure may also box in President-elect Joseph R. Biden Jr., who has indicated that he wants to recalibrate America’s policies toward China while continuing to pressure the country on some issues.

“The executive order will take effect on Biden’s watch,” said Ms. Sacks. “Even if his team doesn’t buy the national security risk, politically the order will be tough to unwind without looking like a concession to Beijing. I see the order as a last-minute flailing to try to tie Biden’s hands.”

The new order tasks the secretary of commerce with identifying the type of transactions that will be affected in 45 days. It also directs the secretary to identify and take appropriate action against other apps, and make broader recommendations on how the United States should develop a program to control the flow of personal U.S. data to foreign adversaries, the senior Trump administration official said. The official said the order was not meant to prevent the Chinese companies from paying their employees in the United States.

In a statement, Wilbur Ross, the commerce secretary, said he had directed his department to begin enacting the orders, “including identifying prohibited transactions related to certain Chinese connected software applications.”

“I stand with President Trump’s commitment to protecting the privacy and security of Americans from threats posed by the Chinese Communist Party,” he added.

The executive order came as the Trump administration and members of Congress also pressured the New York Stock Exchange on Tuesday to remove China’s three major state-run telecommunications companies from the exchange.

The stock exchange late Monday had reversed its original plans, announced last week, to delist the companies to comply with an executive order from the administration aimed at stopping American investment in companies linked to the Chinese military.