How Claims of Dead Michigan Voters Spread Faster Than the Facts 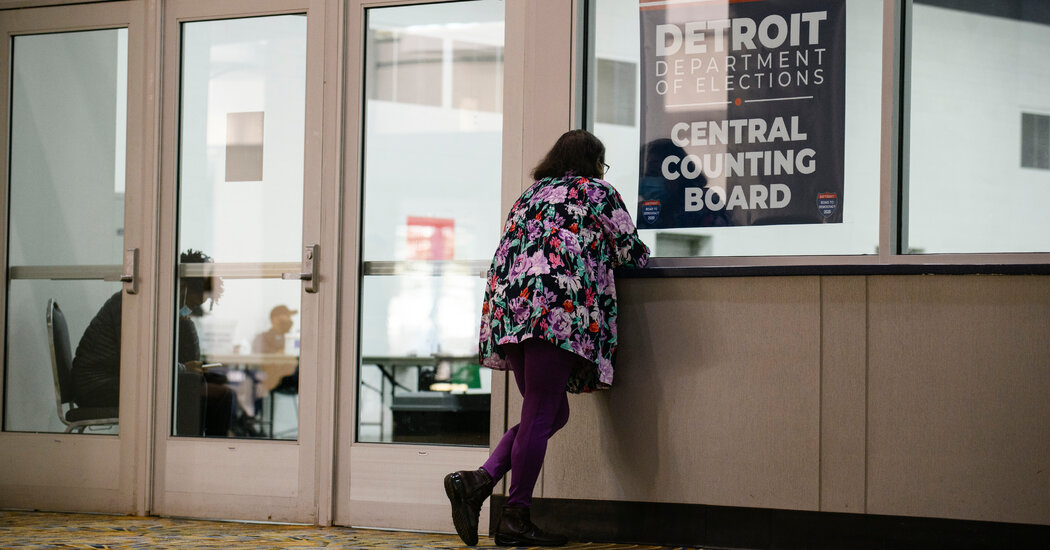 The tweets began to arrive Wednesday night, carrying explosive claims that people in Michigan were voting under the names of dead people.

Austen Fletcher, a former Ivy League football player turned right-wing internet journalist, said in videos posted to Twitter that he had discovered registration documents on a State of Michigan website that showed that four people with reported birth dates from 1900 to 1902 had submitted absentee ballots ahead of Tuesday’s election. “How long has this been going on?” he asked.

By Thursday morning, Mr. Fletcher’s videos were the talk of the Republican internet. “Why is it taking regular Americans to expose this level of obvious corruption?” said Candace Owens, a conservative commentator, sharing one of the videos to her 2.7 million Twitter followers.

Yet a few phone calls by Mr. Fletcher would have revealed evidence that indicates that what appeared to be fraud were run-of-the-mill clerical errors.

In one case, a 74-year-old woman in Hamlin Township, Mich., had asked for an absentee ballot for the first time in years, setting off a notice from the state’s digital voter rolls that her birth date was not on file, according to Catherine Lewis, the town’s clerk. The system had assigned the woman the default birth date: 01/01/01, or Jan. 1, 1901.

Ms. Lewis said she knew the woman. Hamlin Township, a rural community on Lake Michigan, has just 3,400 people. She said she had driven to the woman’s home and collected a copy of her driver’s license so she could vote by mail. But Ms. Lewis had not gotten around to updating her file. “Rest assured,” Ms. Lewis said, “she is a legal voter.”

Then, on Thursday morning, after a marathon week for Ms. Lewis running the town’s vote, her phone began ringing. “I have had 18 calls and at least 20 strange emails asking me if I committed voter fraud,” she said. She was staying home with her family. “I need to be concerned about my family’s welfare,” she said.

In a text message on Friday, Mr. Fletcher, who goes by the pseudonym Fleccas online, said he was about to publish evidence that thousands of ballots in Michigan had been submitted under the names of dead people. He declined to speak on the phone. “Who is requesting, filling out, and returning these ballots,” he said in his message. “How many got thru? That’s my question.”

Since the polls closed on Tuesday, a number of internet sleuths have widely disseminated what they said was evidence that showed Democrats were trying to steal the election. In virtually every case so far, mainstream journalists have found the claims to be false or the product of typical errors in the election process.

Yet many people have not heard the truth behind the claims they are sharing — or, if they have, have dismissed it. Social media has created echo chambers where people hear largely from like-minded voices. And President Trump’s years of attacks on the media have caused many of his supporters to distrust journalists.

The result is a growing belief among some Americans that the 2020 election has been undermined by widespread fraud — a view sharply amplified by the president — despite virtually no evidence.

“What’s that saying? A lie gets halfway around the world by the time the truth gets its pants on,” said Matt Mackowiak, a Texas Republican consultant who inadvertently spurred false voter-fraud claims on Wednesday.

Mr. Mackowiak posted screenshots of an election map on Twitter that appeared to show that Joseph R. Biden Jr. had received 100 percent of newly counted ballots in an update to the vote count in Michigan early Wednesday.

Like Mr. Fletcher’s dead-voter videos, Mr. Mackowiak’s screenshots swiftly went viral. Conservative websites posted stories with headlines like “Very Odd: Michigan Found Over 100,000 Ballots and Every Single One Has Joe Biden’s Name on It.” About two hours later, Mr. Trump had shared the images on Twitter with the caption, “WHAT IS THIS ALL ABOUT?”

By that time, Mr. Mackowiak had seen people suggesting that the numbers he highlighted were the result of an error that had been fixed. He deleted his original tweet and wrote a new post clarifying that the suspicious numbers were not the result of fraud.

Still, Mr. Mackowiak’s images continued to rocket around the internet. They were ultimately shared hundreds of thousands of times on Twitter. His correction? It had been shared 3,600 times as of Friday.

“I certainly wasn’t intending to make a typo appear fraudulent,” Mr. Mackowiak said. “My worst fears going into the election was that half the country would see the result as illegitimate.”

A day later, after the claims connected to Mr. Mackowiak’s images had been widely debunked by news organizations, Mr. Trump spent 17 minutes behind the lectern in the White House briefing room, claiming without evidence that Democrats were trying to steal the election. One of his specific suggestions of evidence was a claim that a tranche of votes from Michigan “all had the name Biden on them.”

Immediately after Mr. Trump’s news conference, William Bennett, who was secretary of education under President Ronald Reagan, was asked on Fox News about possible voter fraud. “If there is evidence, and I believe there will be, it should come forward,” he said. He offered only one potential example of such fraud: “Large batches of votes with not a single one for Donald Trump.”

In the case of Mr. Fletcher’s dead-voter claims, the three other names in Michigan that he highlighted also appeared to be votes cast by living, eligible voters.

Amanda Kirkpatrick, the clerk in Jackson County, Mich., said a resident there who had appeared in one of Mr. Fletcher’s videos was an eligible voter who had cast her ballot, but the state’s voter rolls had an incorrect birth date for her. Ms. Kirkpatrick said her office had contacted the woman, checked her identification and updated her birth date.

There was a similar story in Detroit, where the other two examples in Mr. Fletcher’s videos matched eligible voters with identical names and ZIP codes there.

The city appeared to have mistakenly recorded the vote of William T. Bradley under his dead father, who had the same name and ZIP code. Mr. Bradley said in an interview that he had voted by mail for the first time because of the pandemic. He said that the ballot did not ask for his birth date and that he simply filled it out, signed it and sent it in mid-September. According to the State of Michigan website, his dead father mailed an absentee ballot on Sept. 19. It said Mr. Bradley never returned his.

In the fourth case, there was another eligible Detroit voter with an identical name and ZIP code as the person named in Mr. Fletcher’s video. That person could not be reached.

The Detroit city clerk did not respond to requests for comment.

Mr. Fletcher’s dead-voter claims were shared hundreds of thousands of times on Twitter, reaching millions of people. On Thursday morning, the Michigan Department of State tweeted its response.

“Fact check: Ballots of deceased voters are not counted,” it said. “On rare occasions, a ballot received for a living voter may be recorded in a way that makes it appear as if the voter is dead,” such as someone with an incorrect birth date or a son being mistaken for his father with the same name, the statement added. “In such scenarios, no one ineligible has actually voted, and there is no impact on the outcome of the election.”

The message was shared on Twitter fewer than 450 times as of Friday.

Mr. Fletcher doubled down. He shared an image on Twitter of four urns with a “Biden-Harris” and “I voted” stickers. Hours later, he uploaded a new video to YouTube, Facebook and Instagram of him walking through his findings again. In the video, he read the statement from Michigan officials.

“Maybe Michigan caught some. I hope they did. But how many didn’t get filtered through in the process and actually made it through and counted?” he said. “Maybe all these people voted for Joe Biden?”