In a First, Uber Agrees to Classify British Drivers as ‘Workers’ 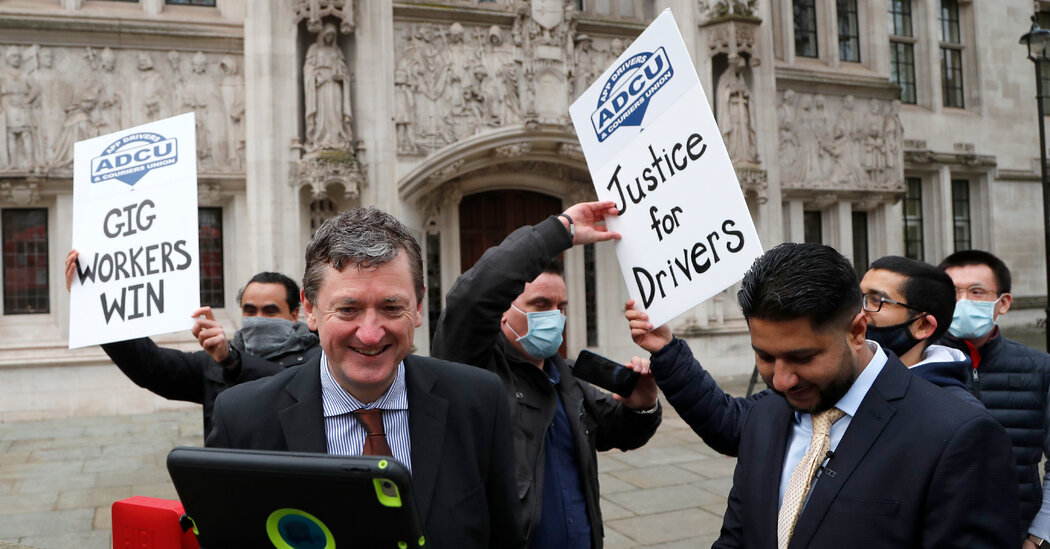 Uber said that, starting on Wednesday, all drivers in Britain would be defined as “workers,” a legal classification in the country that entitles the drivers to a minimum wage and vacation time. It does not give the full protections of the classification known as full “employee,” which includes paternity and maternity leave and severance pay if dismissed, among other benefits.

In a statement, Uber said last month’s court decision “provides a clearer path forward as to a model that gives drivers the rights of worker status — while continuing to let them work flexibly, in the same way they have been since Uber’s launch in the U.K. in 2012.”

Uber said drivers would receive the country’s minimum wage from the time they accept a ride request until they drop the passenger at the location, but not while they wait for someone to request a ride. Drivers can still earn more if a fare is higher than the minimum wage, as is often the case, Uber said. Starting April 1, Britain’s minimum wage for people over 25 years old will be 8.91 pounds, or about $12.40.

The debate over whether drivers should be paid while they wait for fares has been contentious in Britain and abroad. Uber has argued that drivers would log on to the app to collect pay without giving any rides, forcing the company to limit when drivers work. But labor advocates said pay during wait time was essential for drivers to earn a wage comparable to workers in other sectors.

“What Uber is being forced to give workers in the U.K. is quite significant,” said Veena Dubal, a law professor at the University of California, Hastings, who studies the gig economy. “There’s a much broader opening available to the labor advocates and unions to make sure that all the laboring time is paid for, but it is certainly going to be a battle.”

For vacation, drivers will receive 12 percent of their earnings, paid out every two weeks, a calculation set by the government.

Uber did not disclose how much the reclassification of British drivers would increase its costs, but it said in a regulatory filing that it did not alter the company’s target of becoming profitable this year. London is one of Uber’s five largest markets, and Britain accounts for about 6.4 percent of the company’s total gross bookings.