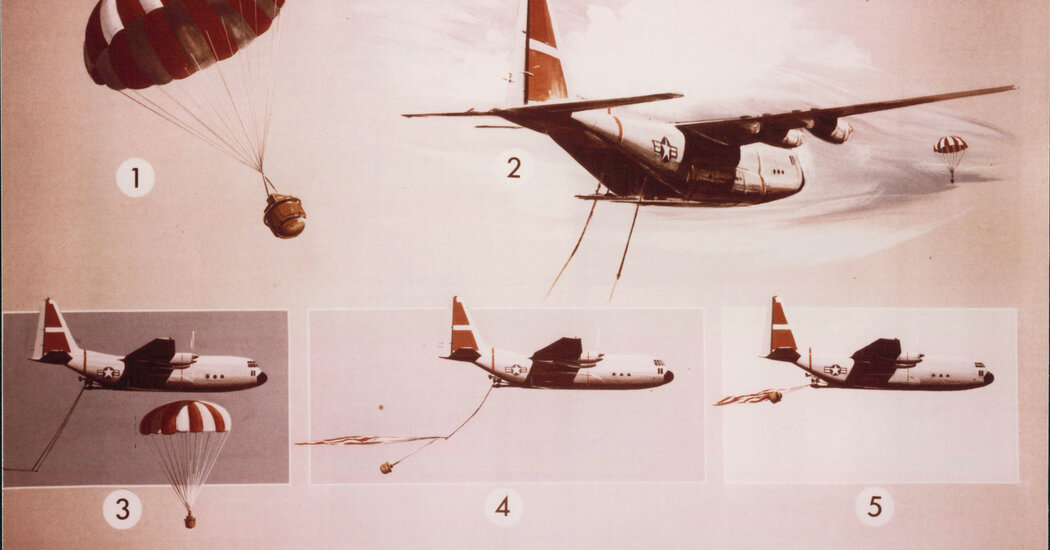 Not being able to see the forest for the trees isn’t just a colloquialism for Mihai Nita — it’s a professional disadvantage.

“When I go into the forest, I can only see 100 meters around me,” said Dr. Nita, a forest engineer at Transylvania University of Brasov, in Romania.

Dr. Nita’s research interest — the history of Eastern Europe’s forests — depends on a vaster, and more removed, vantage than eyes can provide.

To map a landscape’s history, foresters like Dr. Nita long depended on maps and traditional tree inventories that could be riddled with inaccuracies. But now they have a bird’s-eye view that is the product of a 20th century American spy program: the Corona project, which launched classified satellites in the 1960s and ’70s to peer down at the secrets of the Soviet military. In the process, these orbiting observers gathered approximately 850,000 images that were kept classified until the mid-1990s.

Even though they’re static, the panoramic photos contain discernible imprints — penguin colonies in Antarctica, termite mounds in Africa and cattle grazing trails in Central Asia — that reveal the dynamic lives of earthly inhabitants below. “It’s Google Earth in black and white,” said Catalina Munteanu, a biogeographer at Humboldt University of Berlin who has used Corona images to show that marmots returned to the same burrows throughout decades of destructive agricultural practices in Kazakhstan.

Modern systems like the Terra, Aqua, Copernicus and Landsat satellites provide environmental scientists with regularly updated images of the planet’s surface. But the satellites only been around for a few decades — four, at most — and many offer less-detailed resolution than the photographs recorded by Corona.

More important, with the spy satellites, scientists can extend a landscape’s timeline even earlier into the 20th century. This, paradoxically, helps us predict what comes next.

“When you double or triple the age of that record,” said Chengquan Huang, a geographer at the University of Maryland, “you can substantially improve your modeling ability into the future.”

In 2019, for example, a group of scientists used Corona images, historical maps and modern satellites to retrace the fluctuating boundaries of Nepal’s Phewa Lake over time. Then, the researchers predicted what could come next, estimating that the shrinking lake could lose 80 percent of its water within the next 110 years. A loss of that magnitude would devastate the lake’s ability to supply water for hydroelectricity generation, irrigation and tourism activities that hundreds of thousands of people in Nepal rely on, they noted.

“We can use imagery in the past to inform the future,” said C. Scott Watson, a geoscientist at the University of Leeds and co-author of the Phewa Lake study.

Early in the Cold War, the United States struggled to acquire military intelligence on the Soviet Union — a vast enemy spanning 11 time zones and one-sixth of the planet’s land surface.

Satellite reconnaissance offered a glimpse into the Soviet black box, said James David, a curator at the Smithsonian National Air and Space Museum in Washington. “Photo intelligence tells you where the enemy’s military forces are,” he said. “It can go a long way in telling you what equipment they have and what their state of readiness is.”

One early answer was Corona, approved by President Eisenhower in 1958. But to photograph the enemy from space, U.S. officials first had to accomplish feats of engineering: developing film that could withstand space radiation and air pressure, and then be retrieved, developed and carefully analyzed.

The first dozen attempted launches of Corona satellites flopped, according to the C.I.A. Some of the vehicles didn’t make it to orbit or back down, and others experienced camera or film mishaps.

Then, in August 1960, the first successful Corona flight made eight daytime passes over the Soviet Union. When the camera had used all 20 pounds of its film, the satellite released its film return capsule from a 100-mile altitude. The package hit the atmosphere, deployed a parachute and was scooped up, midair, by an Air Force plane northwest of Hawaii. It became the first photography ever recovered from orbit.

“They had no idea if these systems would work,” said Compton Tucker, a senior earth scientist at NASA’s Goddard Space Flight Center. “It’s really very ingenious.”

Over time, Corona cameras and film improved in quality. With an archive of almost one million images, the program detected Soviet missile sites, warships, naval bases and other military targets. “They counted every rocket in the Soviet Union,” said Volker Radeloff, an ecologist at the University of Wisconsin — Madison whose lab has used the images in its studies. “These images kept the Cold War cold.”

After 145 missions and 120 returned usable film canisters, the multi-billion-dollar Corona program was decommissioned in 1972 in favor of satellites that could beam their imagery back to Earth in digital format.

When, in 1995, the spy program’s archival images were declassified, some appeared on the front page of The Times.

Government officials were motivated to release the images, in part, because of their anticipated value for environmental scientists.

“These kinds of photographs,” Vice President Gore said at the time, “are what make today’s event so exciting to those who study the process of change on our Earth.”

Since then, the program has remained relatively unknown to the public. “It’s the best military, taxpayer-funded success that no one knows about,” said Jason Ur, a Harvard University archaeologist who regularly depends on Corona images for his research.

One reason for their relative obscurity is that scientists who wanted to use the images have needed to overcome a variety of obstacles. For example, while the pictures have been declassified, it costs researchers $30 to digitize a single image. Dr. Radeloff said there are “gobs and gobs of data,” but that most images are “still rolled in film and have not yet been scanned.”

And it’s taken until recently for software to become sophisticated enough to correct, orient and analyze the often-distorted panoramic satellite images.

With this and other technical advances, research using Corona data has picked up. In the last two years alone, scientists have studied the images to track rock glacier movements in Central Asia, shoreline changes in Saudi Arabia, wadi trees in eastern Egyptian deserts and ice loss in Peru.

Once wrangled, Corona’s spy photos can uncover a landscape’s history beyond the contemporary era of widespread satellite imaging.

Often, Corona’s ’60s-era snapshots captured habitats before humans dramatically inundated, paved over, plowed up or developed wild spaces into new cities, hydroelectric dams, farmland or industrial zones. The images even challenged our assumptions about untouched ecosystems — revealing, more than once, that presumed old-growth forests are actually younger than 70 years old.

“In a lot of cases, they lead us to landscapes that are gone, that don’t exist anymore” Dr. Ur said. “Corona is like a time machine for us.”

In 2013, Kevin Leempoel, a biologist, set out to retrace the historical boundaries of mangroves in Zhanjiang Mangrove National Nature Reserve in China’s south. Records were spotty before the 1980s, when global satellites began regularly documenting the planet’s surface from space. “There was this big gap — we didn’t really have any other time point,” said Dr. Leempoel, now with Britain’s Royal Botanic Gardens, Kew.

By examining black-and-white Corona images and marking the forest’s outline by hand, Dr. Leempoel demonstrated in 2013 that human activity had driven mangrove cover down by more than a third from 1967 to 2009. That kind of finding would have been impossible without the historical photos, he said.

“In ecology, we’re all faced with the same issue: We start to have good data in the ’80s or ’90s at best,” Dr. Leempoel said. “The difference between today and then is not huge. But compared to a century ago, the difference is gigantic.”

Still, Corona data remains relatively untapped by scientists. Only 5 percent — about 90,000 images out of 1.8 million total — of the country’s ever-growing backlog of declassified spy satellite photography has been scanned so far, said Dr. Radeloff. “It hasn’t been used that much yet. We’re at a cusp,” he said.

With climate change and other global ecosystem transformations, it’s never been more important to record and piece together long-term environmental timelines, Dr. Muntenau said: “Everything we do leaves a footprint. That impact might only show up decades later.”