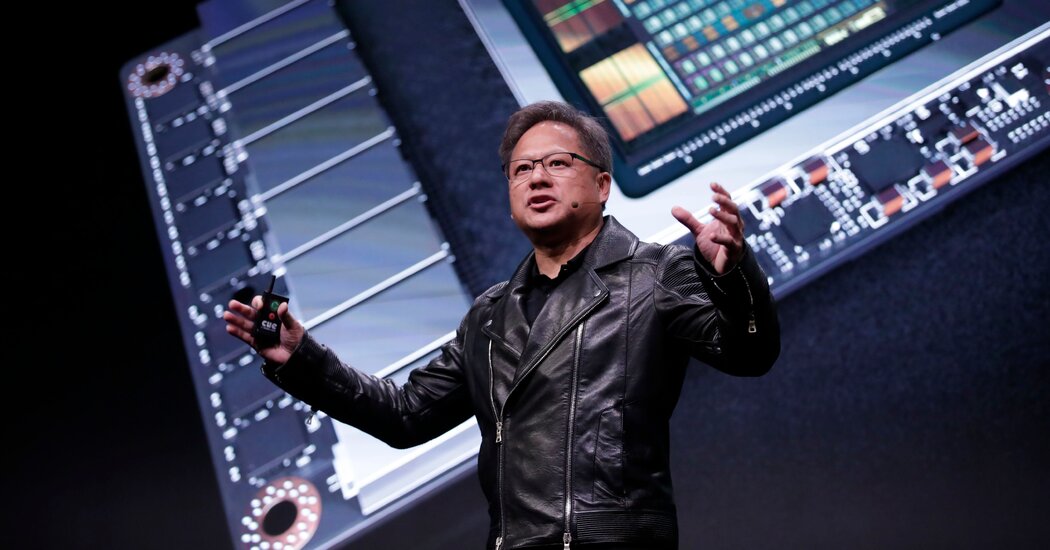 SAN FRANCISCO — Nvidia said on Sunday that it would acquire the British chip designer Arm from SoftBank in deal worth about $40 billion, a move that could reshape the battle over technology that powers smartphones and data centers.

Nvidia, best known for supplying chips that render images in video games, said it would pay SoftBank a combination of cash and shares in the transaction. Nvidia’s market capitalization has skyrocketed to over $300 billion lately, partly owing to recent success in artificial intelligence applications and pandemic-fueled growth in chips used for PC gaming.

If completed, the transaction would instantly transform Nvidia into one of the most influential players in smartphone technology, a market that had previously eluded it. Arm, which licenses designs that other companies turn into chips, has long defined the computing technology found in most mobile devices. And Arm designs are starting to play a bigger role in cloud data centers.

But the deal is likely to prompt close scrutiny by antitrust authorities around the world. Influential Arm customers potentially affected by the transaction include Apple, Samsung Electronics, Amazon.com, Qualcomm and Huawei.

Arm, which was acquired by SoftBank in 2016, is widely perceived as an independent entity that gives equal treatment to all licensees. Industry executives and analysts have pointed to potential conflicts if a company received technical assistance from an Nvidia-owned Arm that could give its own chip business unfair advantages over other licensees.

Jensen Huang, Nvidia’s chief executive, pledged to keep operating Arm as it has been. “Arm’s business model is brilliant,” he wrote in a letter to Nvidia employees on Sunday. “We will maintain its open-licensing model and customer neutrality, serving customers in any industry, across the world.”

Nvidia also said it would keep operating Arm from Cambridge, England, and honor commitments SoftBank made to keep investing in Britain. Mr. Huang said he and Simon Segars, Arm’s chief executive, had already held initial talks with British officials, who were “delighted” with the company’s expansion plans.

But the deal is already facing some criticism in Britain. Hermann Hauser, Arm’s co-founder, said a takeover by an American company would lead to British job losses and leave businesses that use Arm semiconductor technology vulnerable to future American actions against China. As technology has become a geopolitical battleground between the United States and China, the Trump administration has taken steps to limit what technology American companies can export to China.

“I think it’s an absolute disaster for Cambridge, the U.K. and Europe,” Mr. Hauser said Monday morning on the BBC’s “Today” program.

For SoftBank, the deal represents a respectable exit from a $32 billion acquisition that had not produced the benefits expected by its chief, Masayoshi Son. Arm has pushed into many kinds of internet-connected devices, as expected, but profits have been squeezed by spending on hiring and other factors.

“SoftBank is excited to invest in Arm’s long-term success as a major shareholder in Nvidia,” Mr. Son said in a statement.

For Nvidia, the transaction elevates a company that for decades labored in the shadows of giants like Intel in setting key technical directions for Silicon Valley.

Mr. Huang was early to recognize that chores such as computer graphics weren’t handled well by the general-purpose processors of the kind popularized by Intel. Nvidia built a business on adding specialized accelerator chips, mainly through add-in circuit boards plugged into PCs.

Mr. Huang later bet shrewdly on modifying its chips and developing software to enable scientific and later artificial-intelligence applications. In another aggressive move, Mr. Huang opted to pay $7 billion for Mellanox, an Israeli maker of networking chips, in a deal that closed in April.

He told analysts in August that the Mellanox deal was essential because cloud services are increasingly not being run on a single server. Instead, portions of applications are being distributed among various chips and systems in a data center, requiring more and more communications between the machines, he said.

So Nvidia has a strong interest in controlling networking technology and other key components in the data center — and that strategy, analysts and industry executives said, extends to controlling general-purpose computing technology like Arm’s, which would allow Nvidia to challenge Intel technology at the heart of most servers.

“The computing unit is an entire data center now,” Mr. Huang said on the conference call last month. “We recognized that, as a computing company, we have to be a data center-scale company.”

Mr. Huang on Sunday said the deal would create the “world’s premier computing company for the age of A.I.,” pushing beyond the data center to bring that technology to distributed devices in a model known as “edge computing.” He said Nvidia would also begin licensing some of its own technology to other companies for the first time, using Arm’s services.

Nvidia said it expected the transaction to close in about 18 months, assuming regulatory approval in the United States, Britain, the European Union and China.