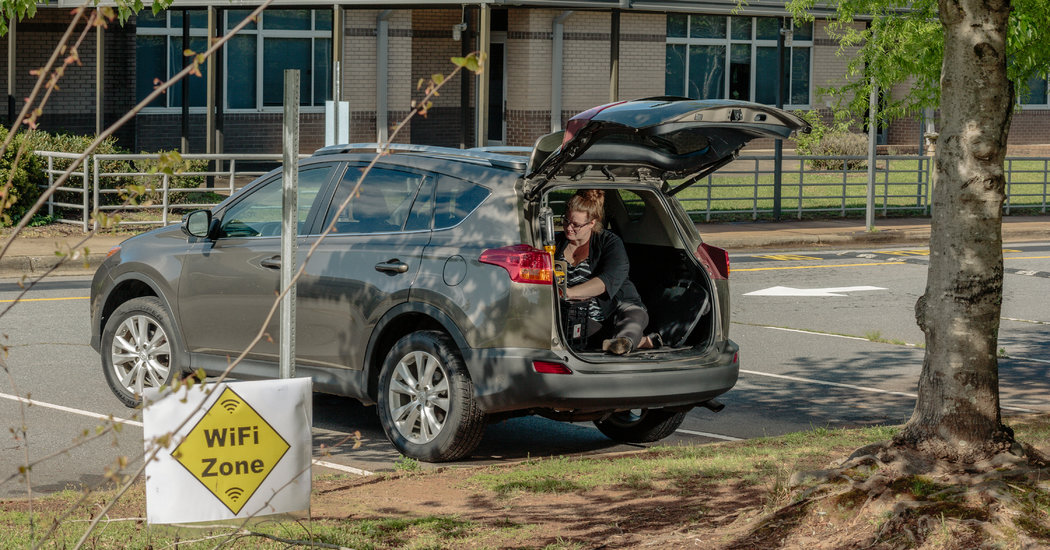 As the sun set on a recent evening in Rutherfordton, N.C., the author Beth Revis drove her green S.U.V. into the parking lot of a closed elementary school and connected to the building’s free Wi-Fi. Then, for the third time since the coronavirus pandemic had taken hold, she taught a two-hour writing class from her driver’s seat.

Ms. Revis, 38, held a flashlight to her face with one hand. In the other, she held a selfie stick with her smartphone attached, looking at the device to speak to her students.

Getting the internet in her area, about 70 miles west of Charlotte, had always been a headache, Ms. Revis said. “But during the pandemic,” she said, “it has turned from a mild inconvenience to a near impossibility.”

For Ms. Revis and many others across the country, parking lots have been a digital lifeline during the pandemic. Instead of spending hours in restaurants, libraries and cafes, people without fast internet access at home are sitting in lots near schools, libraries and stores that have kept their signals on.

In Ohio, Jon Husted, the lieutenant governor, has directed people to connect to hundreds of nonprofits, libraries and schools across the state. School leaders in Philadelphia and Sacramento have encouraged families to use free hot spots in library and school parking lots, and more than 100 people logged on to the Wi-Fi of one of Omaha’s libraries over three days recently.

Near Topeka, Kan., a steady flow of cars now arrive outside the public library, while other cars cluster near connected bookmobiles parked in lots near a women’s correctional facility and a mobile home park.

“I hope that there is a lesson learned from this,” said Gina Millsap, the chief executive of the Topeka & Shawnee County Public Library. “Broadband is like water and electricity now, and yet it’s still being treated like a luxury.”

The dependence on Wi-Fi in parking lots shows the lengths to which people are going to combat the country’s digital divide, one of the most stubborn problems in technology — and one the coronavirus has exacerbated.

One in four Americans has no high-speed internet access at home, according to the Pew Research Center, either because it’s too expensive or because the home is in a rural area with limited service. Some use their smartphone data plans for high-speed internet access, but those plans are often insufficient to handle work from home and distance learning. That makes it harder for many people to work from home during the health crisis and for their children to keep up with their schoolwork away from the classroom.

In recent weeks, numerous federal lawmakers, both Republicans and Democrats, have pushed for legislation to make service more affordable, especially for families with school-age children. But such legislative pushes have happened in the past without ever crossing the finish line.

“What is disappointing is that we have done nothing for years to address the problem,” said Mignon Clyburn, a former commissioner at the Federal Communications Commission who has long pressed for more funding for rural broadband and subsidies for low-income families. “Now we are in a crisis, and we are triaging.”

On federal internet service maps, Louis Derry appears to have broadband access, because a few people in his area of upstate New York have high speeds, defined by the government as 25 megabits per second. But at his home, seven miles from Cornell University, only a much slower speed is available from his provider — 5 megabits per second. It is not enough to support the needs of his family.

The family takes turns driving down to Brookton’s Market, a small country store with a gravel driveway, to park and connect to its free internet. Mr. Derry’s daughter, Ellie, a freshman at Colorado College, goes almost daily for her Zoom class sessions and to download big files that she can take home and work on offline. Other cars are almost always parked nearby, drivers typing away at their laptops and using the free Wi-Fi. They often keep one empty spot between them, to follow social distancing guidelines.

In more urban areas, the problems are due to affordability. Mary Anne Mendoza, 26, a doctoral student at the University of California, Irvine, shares the least expensive internet service available with her mother and sister in their two-bedroom apartment near the college. When her mother, an M.B.A. candidate, is on a videoconference call, and her sister is online for an undergraduate class, the Wi-Fi at home slows to a crawl.

As a result, Ms. Mendoza, who also teaches political science at California State Polytechnic University, Pomona, has been driving to the parking lot of a nearby Starbucks to get online.

“In my car, I get the privacy I need, and the quality of service is better,” she said.

Anna Haskins, a professor of sociology at Cornell, said she feared that relying on parking lots was inadequate for her students, who are taking classes remotely. One student, in St. Louis, dropped all electronic communication for two weeks until he was able to find a public Wi-Fi hot spot. Another, in rural Oklahoma, is driving several miles a day to the nearest parking lot Wi-Fi spot to do her quizzes and homework from her car.

“To leave the house and take a quiz in a car shows how hard this transition is for some,” Ms. Haskins said. “It’s hard to evaluate people fairly. Is their grade on a quiz low because they didn’t study or because they didn’t have the best situation to take the quiz?”

In Philadelphia, the high cost of broadband has left an estimated 17 percent of residents without internet at home, according to the Movement Alliance Project, a consumer advocacy group. The city’s school district will begin formal online classes on May 4, and educators fear that many lower-income students will be left behind. The district has passed out 80,000 Chromebooks to its 130,000 students, but is concerned that residents won’t have broadband access to participate in classes and make the most of their new devices.

The school district has pointed to free and reduced-priced services offered by providers like Comcast, but some parents have complained of long waits to get the service. Officials have also pointed families to free parking lot hot spots around the city as a last resort for students, said Monica Lewis, a spokeswoman for the school district.

The idea of using a parking lot for studies has rubbed many residents the wrong way.

“In a city like Philadelphia, you can’t expect people to socially distance in a parking lot,” said Devren Washington, a senior policy director at the Movement Alliance Project. “You can’t expect some students to be sitting in a parking lot doing their schoolwork while others are in a much better position at home.”