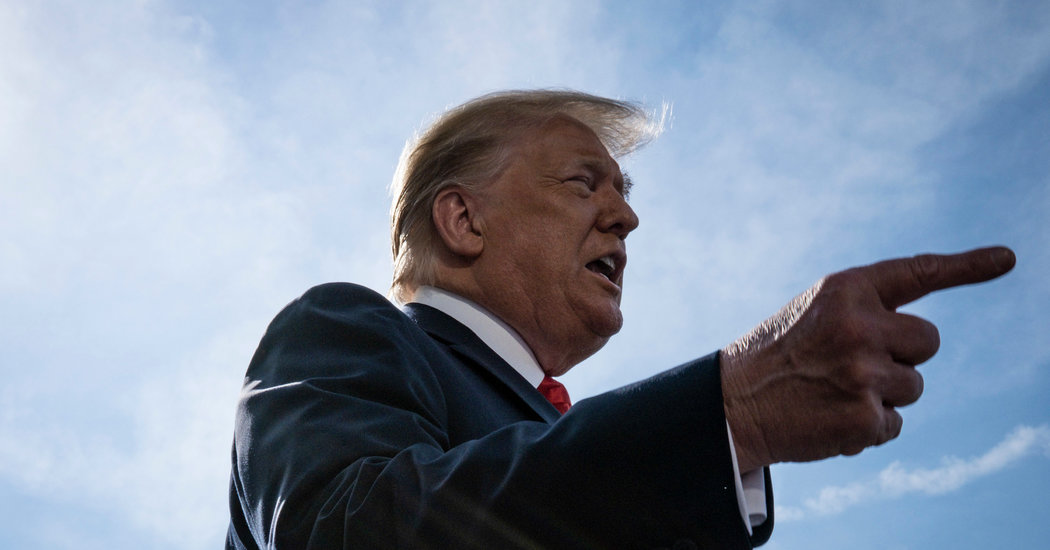 SAN FRANCISCO — Reddit, one of the largest social networking and message board websites, on Monday banned its biggest community devoted to President Trump as part of an overhaul of its hate speech policies.

The community or “subreddit,” called “The_Donald,” is home to more than 790,000 users who post memes, viral videos and supportive messages about Mr. Trump. Reddit executives said the group, which has been highly influential in cultivating and stoking Mr. Trump’s online base, had consistently broken its rules by allowing people to target and harass others with hate speech.

“Reddit is a place for community and belonging, not for attacking people,” Steve Huffman, the company’s chief executive, said in a call with reporters. “‘The_Donald’ has been in violation of that.”

Reddit said it was also banning roughly 2,000 other communities from across the political spectrum, including one devoted to the leftist podcasting group “Chapo Trap House,” which has about 160,000 regular users. The vast majority of the forums that are being banned are inactive.

“The_Donald,” which has been a digital foundation for Mr. Trump’s supporters, is by far the most active and prominent community that Reddit decided to act against. For years, many of the most viral Trump memes that broke through to Facebook, Twitter and elsewhere could be traced back to “The_Donald.” One video, “The Trump Effect,” originated on “The_Donald” in mid-2016 before bubbling up to Mr. Trump, who tweeted it to his 83 million followers.

Social media sites are facing a reckoning over the types of content they host and their responsibilities to moderate and police that content. While Facebook, Twitter, YouTube, Reddit and others originally positioned themselves as neutral sites that simply hosted people’s posts and videos, users are now pushing them to take steps against hateful, abusive and false speech on their platforms.

Some of the sites have recently become more proactive in dealing with these issues. Twitter started adding labels last month to some of Mr. Trump’s tweets to refute their accuracy or call them out for glorifying violence. Snap also recently said it would stop promoting Mr. Trump’s Snapchat account after determining that his public comments off the site could incite violence.

By contrast, Facebook, the world’s largest social network, has said that it refuses to be an arbiter of content. The company said that it would allow all speech from political leaders to remain up on its platform, even if the posts were untruthful or problematic, because such content was newsworthy and in the public’s interest to read.

Facebook has since come under increasing fire for its stance. Over the past few weeks, many large advertisers, including Coca-Cola, Verizon, Levi Strauss and Unilever, have said that they plan to pause advertising on the social network because they were unhappy with its handling of hate speech and misinformation.

Reddit, which was founded 15 years ago and has more than 430 million regular users, has long been one corner of the internet that was willing to host all kinds of communities. No subject — whether it was video games or makeup or power-washing driveways — was too small to discuss. People could simply sign up, browse the site anonymously and participate in any of the 130,000 active subreddits.

Yet that freewheeling position led to many issues of toxic speech and objectionable content across the site, for which Reddit has consistently faced criticism. In the past, the company hosted forums that promoted racism against black people and openly sexualized underage children, all in the name of free speech.

That has haltingly changed over time. In 2015, Reddit introduced anti-harassment policies. Later that year, it banned several subreddits that targeted black or obese people. In 2016, it rolled out additional anti-harassment measures and tools. It also took down forums dedicated to openly buying and selling drugs.

But the company’s executives have struggled in particular with how to handle “The_Donald” and its noxious content. Reddit said people in “The_Donald” consistently posted racist and vulgar messages that incited harassment and targeted people of different religious and ethnic groups on and off its site.

“The_Donald” has also heavily trafficked in conspiracy theories, including spreading the debunked “PizzaGate” conspiracy, in which Hillary Clinton and top Democrats were falsely accused of running a child sex trafficking ring from a pizza parlor in Washington.

Reddit said that as of Monday, it was introducing eight rules that laid out the terms people must abide by to use the site. Those include prohibiting targeted harassment, revealing the identities of others, posting sexually exploitative content related to underage children, or trafficking in illegal substances or other illicit transactions.

While the site had already banned many of these behaviors, the latest changes take a harder line on speech that “promotes hate based on identity or vulnerability.”

Mr. Huffman said users on “The_Donald” had frequently violated its first updated rule: “Remember the human.” He said he and others at Reddit repeatedly attempted to reason with moderators of “The_Donald,” who run the subreddit on a volunteer basis, to no avail. Banning the forum was a last-ditch effort to contain harassment, he said.

“We’ve given them many opportunities to be successful,” Mr. Huffman said. “The message is clear that they have no intention of working with us.”

Many Republican lawmakers have accused social media companies of censoring conservative viewpoints on their sites. Mr. Huffman said that banning “The_Donald” was not an attempt to specifically target conservatives.

“Absolutely not, full stop,” he said.

The new bans follow the resignation this month of Alexis Ohanian, one of Reddit’s co-founders, from the company’s board of directors. Mr. Ohanian, who said he had been moved by the protests over the death of George Floyd, a black man in Minneapolis who was killed in police custody last month, asked to be replaced on Reddit’s board with a black candidate.

“I’m writing this as a father who needs to be able to answer his black daughter when she asks: ‘What did you do?’” Mr. Ohanian, who is married to the tennis star Serena Williams, said in a blog post at the time. “To everyone fighting to fix our broken nation: Do not stop.”

Michael Seibel, the chief executive of the Silicon Valley start-up incubator Y Combinator and an African-American, has replaced Mr. Ohanian on Reddit’s board.

Reddit executives said the site remains a place that they hope can be a forum for civil political discourse in the future, as long as users play by its rules.