SpaceX’s Next NASA Launch: When to Watch 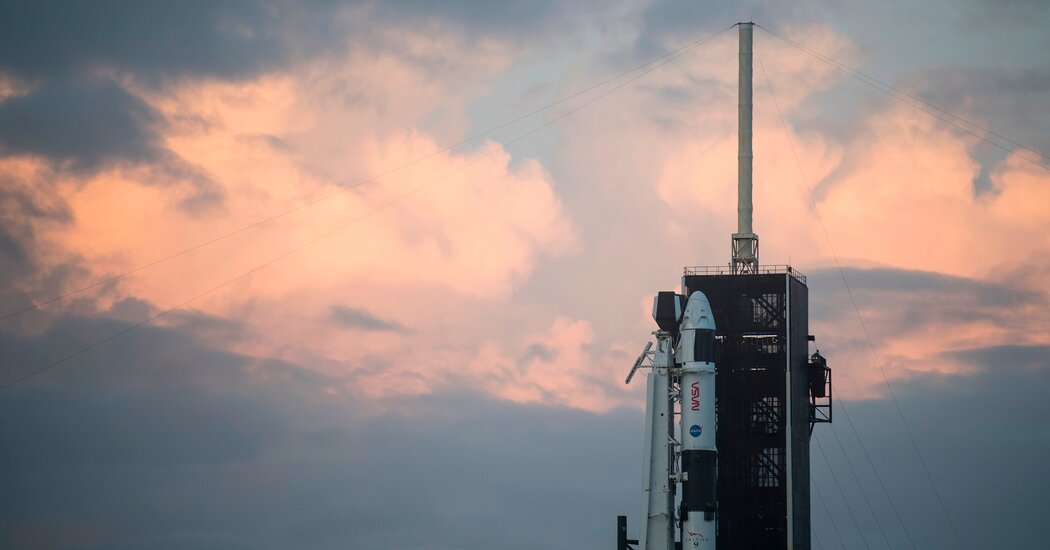 In Florida on Sunday, a rocket and capsule built by SpaceX will carry crew members to the International Space Station. The NASA mission follows on a successful demonstration of the same spacecraft that launched in May and returned two astronauts to Earth in August. Here’s what you need to know about the launch.

What is SpaceX launching?

Four astronauts — three from NASA, one from JAXA, the Japanese space agency — will be sitting inside a SpaceX Crew Dragon capsule, boosted to orbit on top of a Falcon 9 rocket. The mission is known as Crew-1, and the astronauts named their capsule Resilience. They are headed to the International Space Station for a six-month stay.

This is the first of what NASA calls “operational” flights of the Crew Dragon. In May, there was a demonstration mission, with two NASA astronauts — Robert Behnken and Douglas Hurley — aboard. That launch, in a capsule named Endeavour, was the first time that a crewed mission had lifted off from the United States to orbit since the retirement of NASA’s space shuttles in 2011. Its return was also the first water landing by astronauts aboard an American spacecraft since the Apollo capsules stopped flying in the 1970s.

NASA has been relying on Russian Soyuz rockets to get its astronauts to the space station. That has become increasingly expensive, rising to a cost of more than $90 million a seat.

When is the launch?

The Crew-1 mission is scheduled to launch on Sunday at 7:27 p.m. Eastern time from the Kennedy Space Center in Florida. NASA Television will broadcast coverage beginning at 3:15 p.m.

The astronauts will arrive at the space station at about 11 p.m. Eastern on Monday, a journey of approximately 27 hours.

Forecasts currently give a 50 percent chance of favorable conditions at the launchpad. SpaceX and NASA are also keeping watch farther out in the Atlantic Ocean. The weather and waters there need to be fairly calm in case something goes wrong during the ascent to orbit and the Crew Dragon needs to make an emergency splashdown (adverse weather conditions led to a postponement of the earlier Saturday launch date).

If Sunday’s launch is delayed, there is a backup opportunity on Wednesday.

Who are the astronauts?

Michael S. Hopkins, 51, a colonel in the United States Space Force, is the commander for the flight. (Colonel Hopkins is also the first member of the newly created U.S. Space Force to go to space.) He was one of nine astronauts selected by NASA in 2009. He has made one previous trip to the International Space Station, in 2013 and 2014, spending 166 days in orbit.

Shannon Walker, 55, has had one previous stint on the space station, in 2010. Dr. Walker has a doctoral degree in space physics from Rice University, where she studied how the solar wind interacted with the atmosphere of Venus.

Soichi Noguchi, 55, an astronaut with JAXA, the Japanese space agency, will be making his third trip to space. He was a member of the crew of the space shuttle Discovery in 2005 on the first shuttle launch after the loss of Columbia and its seven astronauts more than two years earlier.

During that visit to the International Space Station, Mr. Noguchi made three spacewalks. That included one to test techniques developed to repair damage to the heat tiles on the shuttle similar to what had doomed Columbia when it re-entered Earth’s atmosphere. In 2009 and 2010, he spent five months in orbit as a member of the space station crew.

Victor Glover, 44, selected by NASA in 2013 to be an astronaut, will be making his first spaceflight. He will be the first Black NASA astronaut to serve aboard a space station crew. Mr. Glover’s achievement is notable for NASA, which has worked to spotlight the “hidden figures” in its history but has so far sent only 14 Black Americans to space out of a total of more than 300 NASA astronauts.

He will not be the first Black astronaut aboard the station. But those who proceeded him from NASA were members of space shuttle crews during the station’s construction and only completed brief stays on the outpost.