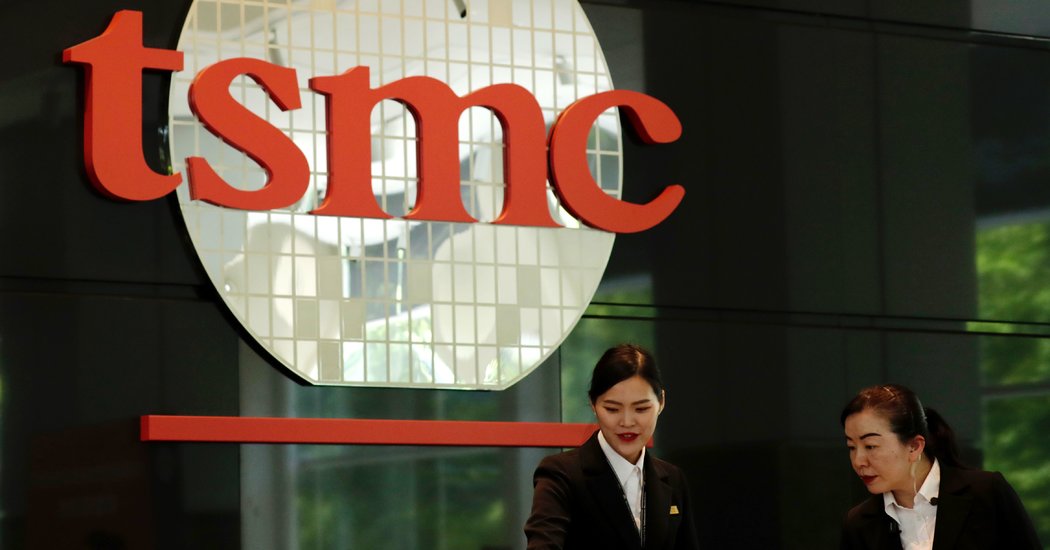 SAN FRANCISCO — Taiwan Semiconductor Manufacturing Company has agreed to build an advanced chip factory in the United States, in a response to the Trump administration’s growing concerns about the security of the global electronics supply chain and its competitive tensions with China.

The decision by T.S.M.C., which operates enormous plants in Taiwan to produce chips used in most smartphones and many other devices, was confirmed late Thursday after earlier press reports.

T.S.M.C. said the factory would be built in Arizona, with unspecified support from the state and federal government. T.S.M.C. estimated its own investment in the plant from 2021 to 2029 at $12 billion, predicting it will directly employ about 1,600 people while indirectly creating thousands of other jobs.

But T.S.M.C.’s estimate of the plant’s output indicates it would be roughly one-fifth the size of the company’s largest “gigafabs,” as the company calls them. It plans to use production technology rolling out this year that is unlikely to be the company’s most advanced when the plant is scheduled to begin operating in 2024.

Still, the move appears to be a win for the Trump administration, which has called for building up U.S. manufacturing capabilities and has criticized the fragility of a tech supply chain heavily centered in China. Mr. Trump has made primacy over China a key tenet of his administration, waging a trade war last year and restricting the abilities of Chinese technology companies like Huawei to do business in the United States over national security concerns.

The deal with T.S.M.C. may be coupled with looser restrictions on the use of American technology in the overseas manufacturing of products, said two people briefed on the deliberations. That would be a relief for Chinese leaders and for Huawei, the telecom equipment giant and a major customer of T.S.M.C., which had been facing potential limits on the amount of American technology it could use.

T.S.M.C. did not mention any such offer in its announcement. A T.S.M.C. spokeswoman said the decision for the factory was based on its business needs, not part of any negotiation for eased trade sanctions. “This U.S. facility not only enables us to better support our customers and partners, it also gives us more opportunities to attract global talent,” the company said in a news release.

The administration’s sanctions have been tied partly to White House concerns about Huawei.

The Trump administration also appears poised to extend a temporary license on Friday that has allowed American companies to continue doing business with Huawei, said one of the people, even after the firm was placed on a blacklist last year.

Officials at the White House declined to comment on T.S.M.C.’s plans, which were earlier reported by The Wall Street Journal.

Defense Department officials have worried for years about the lack of secure U.S. factories capable of producing the most advanced chips, concerns that have prompted talks with companies that include Intel, Samsung Electronics and GlobalFoundries. Worries have spread to other branches of government as some chips made by T.S.M.C. have become critical to military and civilian hardware.

The coronavirus, which sent shock waves through supply chains in Asia, along with growing tensions with the Chinese government, has added new pressures for government action, industry executives said.

But money to create new chip plants has been a key obstacle. Advanced semiconductor factories, which process and slice up silicon discs to make chips, now frequently cost more than $10 billion to get up and running.

Mark Liu, T.S.M.C.’s chairman, told The New York Times in October that T.S.M.C. had been negotiating with the Commerce Department about a possible U.S. plant, but said it would require substantial government subsidies. How much, if any, public money might be associated with the company’s decision was unclear.

In the investor call last month, Mr. Liu added that there was a “cost gap” to creating an American plant that was “hard to accept at this point. Of course, we are doing a lot of things to reduce that cost gap.”

“We currently think it is in the best interest of the United States and of Intel to explore how Intel could operate a commercial U.S. foundry to supply a broad range of microelectronics,” said Robert Swan, Intel’s chief executive, in an April 28 letter reported earlier by The Wall Street Journal.

An Intel spokesman declined to comment on the T.S.M.C. decision. GlobalFoundries, an Abu Dhabi-owned company that makes chips in the United States for the Pentagon in former IBM factories, questioned whether putting money into T.S.M.C. was the best way to reduce reliance on foreign vendors.

“Does that make sense?” asked Laurie Kelly, the company’s vice president for global communications. “There are so many other options.”

Electronic advances, particularly chips designed by American companies, have long been crucial to America’s military prowess. But domestic production lines of many chips have moved overseas, raising questions about supply interruptions in the event of political or military crises abroad. Examples include programmable chips used in fighter jets and 5G communications chips, now made almost exclusively by T.S.M.C.

“The era of reflexive offshoring is over,” wrote Robert Lighthizer, the United States trade representative, in an opinion piece in The Times on Monday.

But Brad Setser, a senior fellow for international economics at the Council on Foreign Relations, said Mr. Lighthizer’s argument was “a statement of hope over reality.” Factory production data through March shows “simply a fall in U.S. production, not reshoring,” he said.