‘This Is Insanity’: Start-Ups End Year in a Deal Frenzy 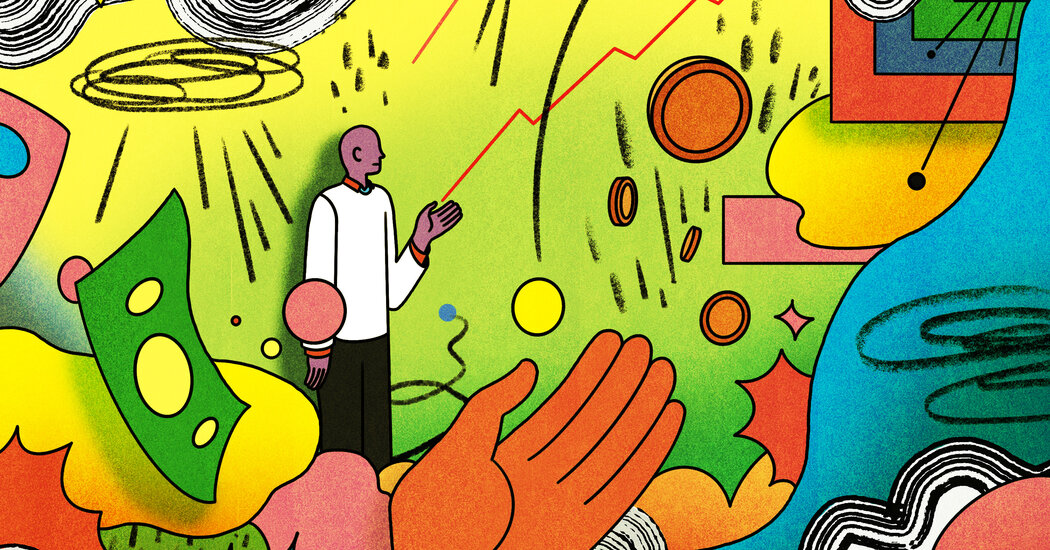 SAN FRANCISCO — Hopin, a virtual events start-up in London, had seven employees and was valued at $38 million at the beginning of the year. Johnny Boufarhat, the company’s chief executive, wasn’t planning on raising more money.

But as the pandemic spread and more people held virtual events, Hopin’s business took off. Unsolicited offers from investors started pouring in. “It’s like a drumbeat,” Mr. Boufarhat said. “That’s become the new way for investors to tempt founders.”

In June, Hopin raised a fresh $40 million from venture capital firms such as Accel and IVP. Last month, without even building a formal presentation, the company garnered a further $125 million, valuing it at $2.1 billion — a 77-fold increase from a year ago.

At the onset of the pandemic, warnings of start-up doom abounded. Those largely faded after the initial shock of the coronavirus wore off. Now, as the new reality of remote work, school, shopping and socializing supercharges the adoption of tech products and services, sentiment has flipped even further — to a frenzy of deal making.

Start-ups like Discord and Robinhood are raising more money at sky-high valuations, and then getting inundated with new funding offers. Venture capitalists are fighting to get into deals. And as the delivery service DoorDash and the home rental start-up Airbnb prepare to go public this week, the bonanza of initial public offerings is likely to enrich and fuel Silicon Valley’s start-up boom even more.

“Almost every hot company right now is being pursued like mad,” said Matt Murphy, an investor at the venture capital firm Menlo Ventures. “More than ever, there is this flight to being in the assets at any price.”

The boom is not just being driven by higher demand for digital products and services. Low interest rates are pushing investors to seek returns in ever-riskier assets. Venture firms have raised record levels of capital. A soaring stock market has enabled more I.P.O.s. Big tech companies are making bold acquisitions. Even Bitcoin has reached a new high.

That helped start-ups amass $36.5 billion in funding in the third quarter, up 30 percent from a year earlier, according to CB Insights, which tracks private financing. Start-ups have raised 223 “mega-rounds” of $100 million or higher so far this year, on pace to surpass last year’s total, according to Pitchbook.

The average valuations for more mature start-ups also spiked to a high of $584 million, according to Pitchbook. And 81 I.P.O.s raised $28.5 billion in the third quarter, the busiest period for listings since 2000, according to Renaissance Capital.

“I haven’t seen anything like this in over 20 years,” said Eric Paley, an investor at the venture firm Founder Collective. “The party is as loud and the drinks are flowing as freely as the dot-com boom, despite that we’re all drinking at home and alone.”

While some start-ups have retrenched in the pandemic, far more have found themselves on the right side of the economy’s “feast or famine” split. With the coronavirus compressing years of tech adoption into a few months, lesser-known software companies focused on areas like cloud computing, financial technology and collaboration tools have thrived. Wall Street recently offered warm welcomes to public listings from fast-growing software start-ups such as Snowflake, Asana, JFrog, Sumo Logic and Unity.

The world underestimated just how big the already-huge tech industry could become, said Roseanne Wincek, an investor at Renegade Partners. “More and more people are waking up to that,” she said.

On Wednesday, DoorDash plans to list its shares and go public at a valuation as high as $35.3 billion, more than double its last private valuation. The company increased its proposed price range to $90 to $95 a share on Friday, up from $75 to $85. The listing may help redeem SoftBank, the swashbuckling mega-fund that was humbled last year by a spate of bad investments in start-ups such as real estate company WeWork.

Airbnb, which was crippled by the travel shutdowns in the spring, then plans to go public the next day. The company plans to raise the proposed price range on its listing, said a person with knowledge of the situation, boosting its valuation to as high as $42 billion, or 32 percent above where it was before the pandemic.

Private start-ups normally raise funding every 12 to 18 months, but with investors furiously competing to give them money, that timeline has now shrunk to three to six months, entrepreneurs and investors said. Some start-ups are even closing back-to-back rounds of funding at higher valuations.

After Discord, a social media platform, raised money in June valuing it at $3.5 billion, investors immediately called to give the company more funding, said one person with knowledge of the company. Now Discord is in talks to raise more and to double its valuation to $7 billion, said two people with knowledge of the talks, who were not authorized to speak publicly. Discord declined to comment. TechCrunch first reported on its new funding.

Instacart, a grocery delivery company, also raised two blockbuster rounds of funding this year, more than doubling its valuation to $17.7 billion. Robinhood, the stock trading app, has pulled in $1.25 billion in four different funding rounds this year, valuing it at $11.7 billion.

In a pandemic, investors have found it difficult to impress entrepreneurs with posh dinners or celebrity-laden parties. But they have gained an edge by moving the fastest.

Rahul Vohra, an entrepreneur who also backs young start-ups, frequently hears a company’s pitch, conducts diligence, signs a deal and wires the money all in the same day, he said.

“There’s no point in sitting on the deal,” Mr. Vohra said. Waiting a week means the deal could get more expensive or become overcrowded with other investors, costing him a chance to invest, he said.

In late summer, Addition, an investment fund, approached Snyk, a security software start-up, about taking more money. Within 48 hours of meeting, Snyk signed a funding agreement. The funding, raised just eight months after Snyk’s last round, valued the company at $2.6 billion, or 80 times its annual recurring revenue of roughly $30 million.

“They used speed to their advantage,” said Peter McKay, Snyk’s chief executive. “Investors who are waiting for someone to raise a round — that’s almost too late.”

Henrique Dubugras, chief executive of Brex, a start-up that provides credit cards to other start-ups, said he had also had more unsolicited calls from investors. Early in the pandemic, Brex laid off 62 employees and closed a restaurant it operated in San Francisco’s South Park. But in June, business started rebounding, he said. Calls from venture capitalists soon followed.

“I’ve honestly never seen it as aggressive as it is right now,” Mr. Dubugras said. He said Brex was not currently planning to raise more funding.

The froth has created a sense of unease among some investors. Mr. Paley said some of Founder Collective’s portfolio companies had raised “breathtaking” financing rounds that felt risky.

“When people congratulate us, we are sheepish about whether these nosebleed valuations are good for us or the founders,” he said.

But there’s little point in declaring the sky is falling, other investors said. Who would listen? For more than a decade, prominent investors have tried to warn against start-up spending, valuations and bubbles. In that time, the tech industry has only gotten bigger, richer and more powerful.

Some investors pointed to Sequoia Capital, one of Silicon Valley’s best-known venture firms, which sent a dramatic “Black Swan” memo in March telling companies to prepare for a difficult year. Six months later, Roelof Botha, a Sequoia partner, said at a virtual TechCrunch conference that he hadn’t anticipated how much this era would benefit tech companies. Sequoia declined to comment.

That same week, three Sequoia-backed start-ups held lucrative I.P.O.s. The firm will most likely see new windfalls this week because of its investments in DoorDash and Airbnb. Sequoia also owns shares in Zoom, the videoconferencing company that has gone from a $1 billion valuation to $116 billion in less than two years.

Frank Rotman, a venture capitalist at QED Investors, tweeted in August that the pattern of start-ups raising back-to-back rounds of funding was “the most disturbing trend I’m seeing.” He wrote that “a company can easily fly off the rails with too much easy and cheap money in their bank account.” Several top venture capitalists wrote him to say they agreed, he said.

Last week, as QED completed a new investment, another venture firm asked to put money into the same company at a twofold to threefold valuation increase. The firm wanted to get an agreement signed the day that Mr. Rotman’s firm wired its money, which was the earliest moment it would be possible to strike another deal.

“This is insanity,” Mr. Rotman said.