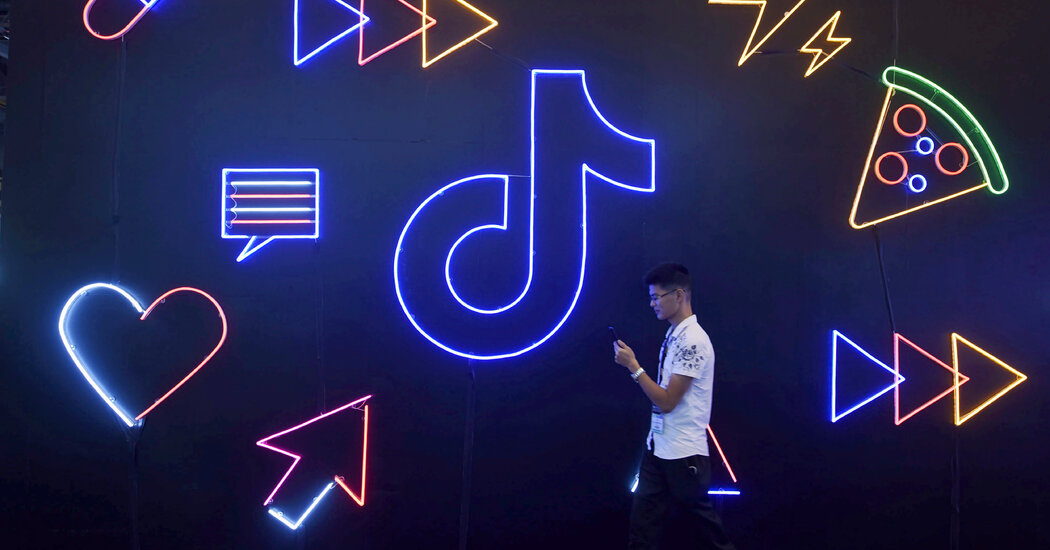 SAN FRANCISCO — TikTok plans to sue the United States government, the company confirmed on Saturday, arguing that President Trump’s moves to block the app had deprived it of due process and claiming it had been unfairly and incorrectly treated as a security threat.

The lawsuit, which the company plans to file next week, would amount to the most public pushback against the United States by TikTok, which is owned by the Chinese internet company ByteDance.

“Even though we strongly disagree with the administration’s concerns, for nearly a year we have sought to engage in good faith to provide a constructive solution,” Josh Gartner, a TikTok spokesman, said in a statement. “What we encountered instead was a lack of due process as the administration paid no attention to facts and tried to insert itself into negotiations between private businesses.”

For weeks, Mr. Trump has railed against TikTok and its ties to China, arguing that the app was a national security threat and that it could share data about its users with the Chinese government. On Aug. 6, Mr. Trump issued an executive order against TikTok, saying it would ban transactions with the app within 45 days. A week later, he issued a separate executive order giving ByteDance 90 days to divest from its American assets and any data that TikTok had gathered in the United States.

Mr. Trump’s actions have pushed ByteDance to seek a sale of TikTok’s U.S. operations to an American company. Microsoft and Oracle are among those that have recently held discussions for such a deal. The companies remain in negotiations for a potential acquisition of TikTok, which has more than 100 million regular users in the United States.

TikTok, which has repeatedly denied that it shares data with Beijing, previously tried to pacify the Trump administration. But as the White House’s actions escalated, TikTok became more critical of its moves.

Representatives for the White House did not respond to requests for comment. The Department of Justice declined to comment. Reuters previously reported on TikTok’s plan to file a lawsuit.

Mr. Trump’s first executive order against TikTok draws its legal authority from the International Emergency Economic Powers Act, which allows the president to regulate economic transactions in a national emergency. Past administrations have used it to sanction foreign governments, as well as terrorists, drug kingpins and hackers, but have never used it against a global technology company.

Past administrations have also used the authority somewhat cautiously, wary that a legal challenge could result in a court curtailing some of the president’s expansive powers. Some Trump administration advisers have been concerned about such an outcome, but others view the economic powers as a kind of blank check, giving the administration wide-ranging authority to restrict American commerce.

Jason M. Waite, a partner at Alston & Bird, said the order raised serious questions, including whether the provision could be used to target people or companies registered in the United States, even if they had a foreign parent company.

In addition to an executive order against TikTok, Mr. Trump also issued an order to cease operations of WeChat, the chat and commerce app that is owned by the Chinese company Tencent and is highly popular in Asia. Similar to TikTok, Mr. Trump gave Tencent a 45-day deadline to wind down its operations in the United States.

But as Mr. Trump has ramped up his attacks against Chinese-backed companies, the fallout has spilled over into the West. Dozens of American companies rely on partnerships with WeChat and Tencent to do business globally; a cancellation of the service in the United States could disrupt corporate America.

As for TikTok, the company appears to have a stronger potential backup plan than Tencent’s WeChat: It is in discussions with multiple suitors for a potential sale. The White House has repeatedly pressed TikTok to store American user data on U.S. servers, something that a sale to an American company is likely to accomplish.

But TikTok also faces continued pressure from Facebook as advertisers flock to other social media platforms while TikTok is embroiled in controversy.

After early attempts to purchase the video app Musical.ly — a company that was eventually joined with TikTok — Facebook instead has tried to clone TikTok’s main video features. In 2018, Facebook created Lasso, a stand-alone app similar to TikTok. And in June, Instagram introduced Reels, a TikTok-like feature.