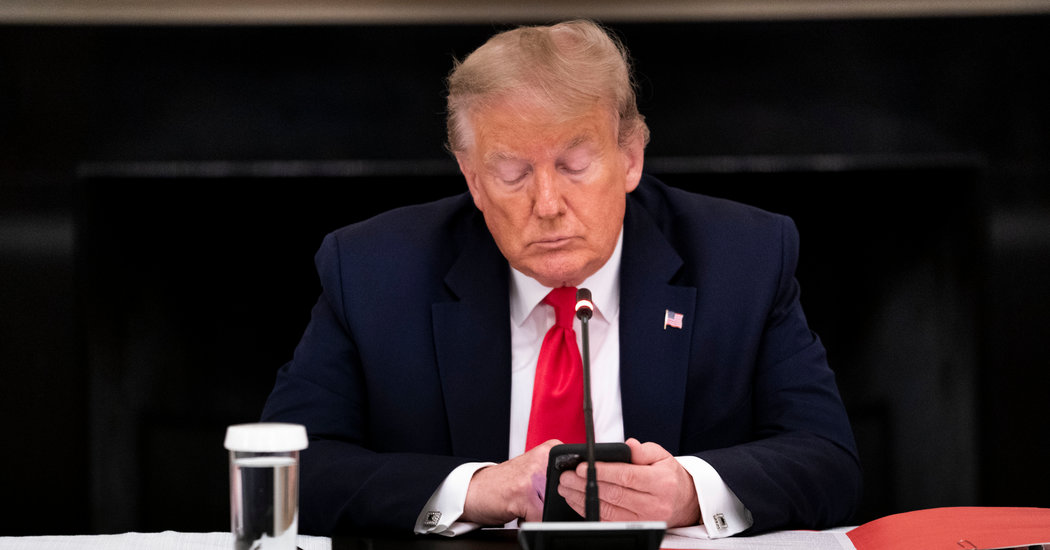 OAKLAND, Calif. — Twitter added a warning to a post from President Trump about a racist baby on Thursday, saying it contained manipulated media designed to mislead people.

Mr. Trump’s tweet, which he posted earlier on Thursday, featured a video of two toddlers running down a sidewalk. The video had been altered to appear as if CNN had broadcast it, along with a fake chyron that claimed, “Racist baby probably a Trump voter.” The video went on to accuse “fake news” of stoking misinformation.

Mr. Trump sourced the video from a popular pro-Trump meme creator who goes by the name CarpeDonktum.

Twitter added the warning later on Thursday after the tweet had been viewed nearly four million times, tagging it with an exclamation mark and the words “manipulated media.” The company’s policies prohibit sharing videos, photos or audio that “have been deceptively altered or fabricated” to trick viewers and have the potential to cause harm. It was the first time Twitter used that particular label on one of Mr. Trump’s posts.

The move is likely to reignite tensions between Mr. Trump and the social media service, which the president uses multiple times a day to broadcast messages to his more than 82 million followers. While Twitter for years took a hands-off approach to Mr. Trump’s tweets, it adopted a more activist position last month by adding labels disputing the accuracy of some of the president’s messages and by cautioning that his posts glorified violence.

The actions provoked Mr. Trump, who last month signed an executive order designed to chip away at legal protections for Twitter and other internet companies that shield them from liability for what their users post.

The back-and-forth has fueled a debate about the responsibilities that social media companies have for what is posted on their sites. Facebook has also been under pressure to remove some of Mr. Trump’s posts but has said that it will not do so because it is not an arbiter of speech. Mr. Trump also shared the altered video of the two toddlers on his Facebook page on Thursday.

Even as Facebook has said it values free speech, it also has policies against hateful iconography. Earlier on Thursday, the social network removed ads posted on its platform from the Trump re-election campaign that prominently featured a symbol used by Nazis to classify political prisoners during World War II.

The White House did not immediately respond to a request for comment about Twitter’s manipulated media label.

Over the past few months, Jack Dorsey, Twitter’s chief executive, has taken a more proactive approach to moderating political speech. In October, Mr. Dorsey said he would ban all political ads from Twitter because political figures should earn their audiences rather than buying them. He added at the time that political ads, including manipulated videos and the viral spread of misleading information, presented challenges to civic discourse, “all at increasing velocity, sophistication, and overwhelming scale.”

Mr. Dorsey was also the one who ultimately approved the labels for tweets from Mr. Trump last month.

Twitter first enforced its policy against manipulated media in March, focusing on a tweet from the White House social media director, Dan Scavino. Mr. Scavino had posted a video of former Vice President Joseph R. Biden Jr. that had been edited to make it appear as though Mr. Biden had endorsed Mr. Trump.

But Twitter has faced criticism for being inconsistent in its moderation. While Mr. Trump has accused the company of censoring conservative voices, others have said that Twitter is too lenient with the president, who often tweets provocative messages. Critics have also said that Twitter has moved slowly on moderation, allowing harassment and misinformation to flourish on its platform.

Mr. Trump often posts videos on his Twitter feed, including those from CarpeDonktum. After Mr. Trump shared the video of the two toddlers on Thursday, CarpeDonktum tweeted a message thanking the president for doing so.

Last fall, Twitter briefly suspended CarpeDonktum’s account after he posted an altered video that depicted Mr. Trump shooting and stabbing media members and political rivals. Twitter said it had received a complaint from the copyright holder for content used in the video.

After Twitter added the warning to Mr. Trump’s tweet on Thursday, the president posted another video. This one suggested that his opponents and the media had falsely depicted his supporters as racist.