Uber Said to Be in Talks to Acquire Grubhub 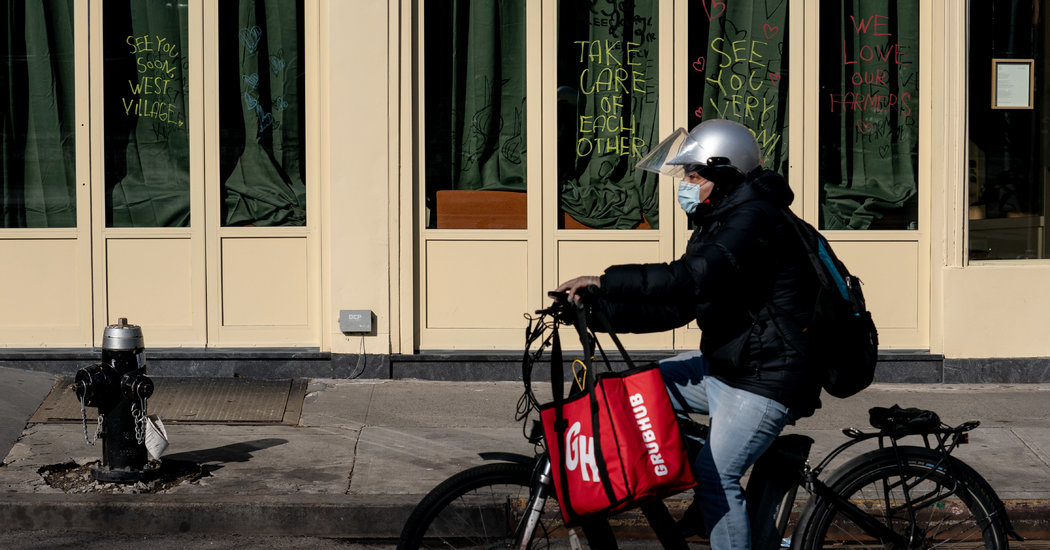 SAN FRANCISCO — Uber is in talks to acquire Grubhub, said three people with knowledge of the discussions, aiming to create one giant player in food delivery as more people turn toward those services in the coronavirus pandemic.

The talks are still in process and could fall apart, the people said.

The discussions are a sign of how thoroughly the coronavirus has upended everything from the way that people are eating to how businesses must shift to find new growth. While food delivery has been offered for years, use of the services has surged in the pandemic as consumers stay home and many restaurants remain shut down.

At the same time, companies like Uber are trying to limit damage to their business from the coronavirus — its main ride-hailing business has cratered as people have stopped traveling — and double down on services that are growing. The food delivery business has also been highly competitive, with rivals regularly undercutting one another on delivery prices, so a deal that would unite two of the players could help reduce those pressures.

A combined Uber Eats, the ride service’s meal delivery unit, and Grubhub would have about 55 percent of the food delivery market in the United States, according to Wedbush Securities. DoorDash, which has filed to go public and has 35 percent of the market, the firm estimated, would be its largest U.S. rival.

“We’ve long believed that consolidation in online food delivery is inevitable, as too many companies with identical business models are depressing industry profitability via a cutthroat battle for market share expansion,” said Tom White, an analyst for D.A. Davidson.

But he added that if a deal happened, it would receive even closer regulatory scrutiny than usual, “given the impact any deal could have on a restaurant industry that is struggling to survive in the face of the pandemic.”

David Cicilline, a Democrat from Rhode Island who leads the House antitrust committee, said in a statement, “We cannot allow these corporations to monopolize food delivery, especially amid a crisis that is rendering American families and local restaurants more dependent than ever on these very services.”

After Bloomberg reported the talks between Grubhub and Uber, Grubhub’s shares soared 29 percent, while Uber’s rose more than 2 percent.

In a statement, Uber said it was always looking to provide value to customers and addressed the sudden share price rises. “We have shown ourselves to be disciplined with capital, and we do not respond to speculative M&A premiums,” it said.

Grubhub said in a statement: “As we have consistently said, consolidation could make sense in our industry, and, like any responsible company, we are always looking at value-enhancing opportunities.” It added that it was confident in its strategy.

Uber’s talks with Grubhub are taking place as deal-making, a business largely built on boardroom confidence, has slowed during the pandemic. About $831.7 billion in takeovers had been announced through Thursday, according to Refinitiv, down 39 percent from a year earlier.

Mergers advisers said many clients had hit pause on deal talks — except for transactions that make financial and strategic sense, including those done by embattled companies whose fortunes may improve by eliminating competition.

Uber approached Grubhub after the pandemic hit, said one person with knowledge of the deal talks. By then, Uber’s ride-hailing business had been severely hurt as most travel was halted. Last week, the company posted a $2.9 billion loss for the first three months of the year and said that even though its revenue was up from a year earlier, its ride-hailing business had all but collapsed in March. It also announced it was laying off 14 percent of its work force.

But its Uber Eats division has been a bright spot. Revenue for the business rose 53 percent in the first quarter from a year earlier.

Beyond the United States, a deal with Grubhub could help Uber compete against much larger players abroad. Uber Eats has a smaller foothold in Europe than some rivals, for example. So if price wars over delivery level out in the United States, Uber could focus on spending more to gain more international market share, two of the people said.

Dara Khosrowshahi, Uber’s chief executive, has told investors that he will exit markets where Uber Eats is not the biggest or second-biggest service. Last week, he shut down Uber’s food delivery business in Egypt and Uruguay, where it was not dominant. He has also recently expanded Uber’s delivery offerings by dabbling in package and prescription medication delivery.

In a call with investors last week, Mr. Khosrowshahi spoke about the virtues of getting bigger in food delivery. “There is a bunch of consolidation happening on a global basis where bigger players can not only provide better service for restaurants and consumers, but can provide a better service kind of on an economic basis that is sustainable,” he said.

Grubhub, founded in 2004, pioneered a model of collecting the menus and information for tens of thousands of restaurants and making them available to diners through its website and apps. It generates revenue by taking a cut of each meal order. But while Grubhub took customers’ orders, restaurants provided their own delivery drivers to fulfill those orders.

That model changed in recent years with the rise of Uber Eats and DoorDash, which provided their own couriers. Grubhub, which went public in 2014, has since had to spend more to compete with those new rivals. While it was once consistently profitable, it reported a loss of $33.4 million in its most recent quarter.

Demand for Grubhub’s services has increased during the coronavirus outbreak, the company said in an earnings report last week. The average amount spent per order rose to $40 from $32 a year earlier.

But analysts said Grubhub was forced to pour most of what its earned back into the business to fend off competitors.

“Grubhub faces an increasingly uphill battle in the world of logistics giants like Uber and Amazon,” said James Cakmak, an analyst at Clockwise Capital. “An exit like this is a best-case scenario.”