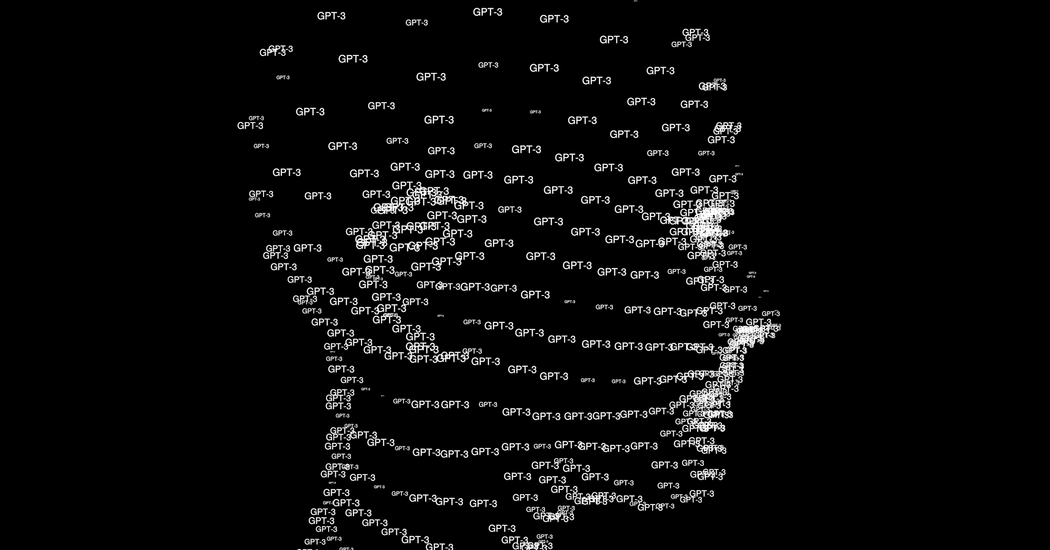 This article is part of the On Tech newsletter. You can sign up here to receive it weekdays. We will be off for the rest of the week and back on Monday.

The idea of computers usurping people has been a staple of science fiction. My colleague Cade Metz says that we might be getting there. Maybe.

Cade spoke with me about a technology known as GPT-3, which learns to crank out writing that seems as if it was composed by humans. This technology could help accelerate the development of computer programs that can carry on a conversation or even spread faked information at the click of a button.

But Cade emphasized that technology has promised for more than half a century to out-human humans. It never quite gets there. Or not yet.

Cade: It’s based on neural networks, which is a technological approach that learns by analyzing vast amounts of data. It’s how Siri recognizes spoken words and Facebook identifies faces in digital photos.

In this case, a neural network scanned through essentially the whole internet to do one thing: Predict the next word in a sequence of words. But it also learned how humans piece language together. This means that with very little prompting, you can get it to generate tweets, pen romance columns or even write simple computer programs.

It’s incredibly impressive, but the system has significant flaws. If I tried to generate a speech that sounded like President Trump, maybe five out of 10 times the GPT-3 version wouldn’t make sense, would repeat phrases in ways that people wouldn’t and would require editing to make it logical.

If something works only half the time, it might not be that useful. People go wrong in assuming technologies like this are more advanced than they really are because they’re cherry-picking the successful experiments and ignoring the mistakes.

What is an example of something useful that GPT-3 might do, and something potentially destructive?

The most frightening potential use is disinformation. Imagine a computer that can create unlimited amounts of false information or fake photos and you can’t distinguish between what’s real and fabricated.

We hear all the time about technology that writes like people or converses like us, or makes realistic computer-generated human faces or faked videos. Why?

Repeatedly since the 1950s scientists have produced technologies that seemed as if we were close to mimicking human intelligence. Each time we were nowhere close.

The capabilities of this kind of technology have advanced significantly in the past 10 years because of neural networks, but this human mimicry is largely based on identifying and matching patterns. Humans do far more than pattern matching. The question is, when does the technology move beyond that?

Well, are these things going to get as capable or more capable than people?

There is a massive argument about this, even among artificial intelligence researchers. Some of them believe that if you give neural networks enough time and data or computerized simulations of the world, eventually they’ll reach human intelligence. And others think that’s just ridiculous, at least in the foreseeable future.

So will you and I still have writing jobs in 10 years?

Having used this stuff and talked to a lot of people about this technology, I’m not worried in the short term. But you can see the trend. This technology continues to get better, and it doesn’t have to get much more advanced to complement human workers or maybe over a long period of time make certain job sectors obsolete.

I will say that language models such as GPT-3 are like self-driving cars. They have both improved dramatically but the last little bit of improvement to reach human capability is very difficult.

Apps for TV are even worse

I griped on Tuesday about smartphone apps. But streaming apps for TV are even more dreadful, because they combine the worst aspects of smartphone app stores and the cable TV system.

Here’s what I mean: If you have cable or satellite television service, every channel in your lineup is there because of an agreement between the channel owner and your TV provider.

ESPN’s owner, Walt Disney, hammers out a complicated contract with Comcast, and Comcast pays Disney a bunch of money, and then you get to watch college football games. Sometimes these business arrangements reach an impasse and ESPN might disappear for a while as Disney and Comcast fight over money. It’s annoying.

The streaming world could have freed us from this old school mess. Instead it entrenched the mess and took it up a notch.

In the same way that Apple and Google decide what apps can work on your phone, companies like Amazon and Roku decide what apps you can download onto their streaming TV devices. And like cable TV companies — and unlike Apple and Google — Amazon, Roku and their peers often reach individual contracts with streaming services to split the airtime for in-app commercials or to pay a commission for each Netflix subscriber who signs up.

When the lawyers can’t make a deal, you might not be able to find HBO Max, the Peacock video app or Apple TV+ on your streaming device. It’s bad. This is why you need to consult a flow chart to watch TV, and streaming apps probably cost more than they would absent this tangle.

I don’t know what to do. Maybe all of us should connect our smartphones or computers to our televisions and bypass the streaming devices entirely. But know this in your heart: The streaming entertainment system makes no sense, and it’s not your fault.

Ping Pong the cat fell four stories from her owner’s apartment to the roof of another building. Ping Pong was rescued by London firefighters and she is OK! Although you wouldn’t know it by looking at Ping Pong’s expression in this photo. (Thanks to my colleague Erin McCann for sharing this on Twitter.)